During summer you can "make hay while the sun shines," but you can't make hay without appropriate gloves to protect your hands. 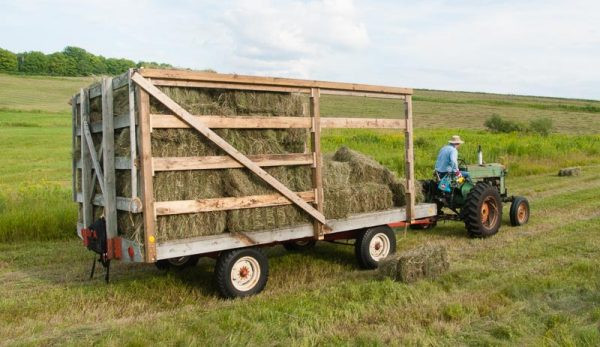 Thanks to an ideal blend of warm weather and frequent rainfall, hay season has arrived on my northern Wisconsin farm, which means lots of watching the sky and checking the weather while looking for the perfect time to ãmake hay while the sun shines.ã

We started a couple of weeks ago with two of the fastest-growing fields, and as I write this weãve just finished cutting another round for baling in a couple of days. With most of the haying still to come this season, now is a good time to buy a fresh pair of hay gloves.

When it comes time to hay bales, I prefer a plain, simple pair of leather glovesãthe thicker and tougher, the better. I don’t care that much about maneuverability and flexibility here, as this work involves no delicate work that requires finesse in finger movement. Instead, I want durable gloves that protect my hands while I lift and stack hundreds of bales at a time. After all, lifting square bales that weigh about 50 pounds, by means of two pieces of twineãoften while using just one handãguarantees blisters if your hands aren’t appropriately protected.

Another reason I like leather gloves: Theyãre reasonably cool during hot weather, and because baling hay takes place on sunny days during the peak of summer, temperatures can rise pretty high, particularly inside the hay barn. Obviously you donãt want winter gloves here (though in a pinch on cooler days, theyãre very soft and protective). I find that knit gloves donãt offer enough protection, while rubber gloves just get, well, wet from sweat.

Of course, when you use gloves as hard as I do, they can wear out pretty fast. The leather gloves that I use for haying eventually develop holes in the fingers where the baling twine repeatedly contacts them. Itãs a shame that they donãt last longer, but hey, better the gloves rip than my fingers.

So with my current pairs of leather gloves starting to show their age, I picked up a new pair for this hay season. It might take a day or two to break them in and loosen them up (which is pretty typical, Iãve found), but before long I expect theyãll fit perfectly and be ready for a busy summer of baling hay and who knows what else. If Iãm lucky, they might even withstand the coming months of heavy use and survive for next year.