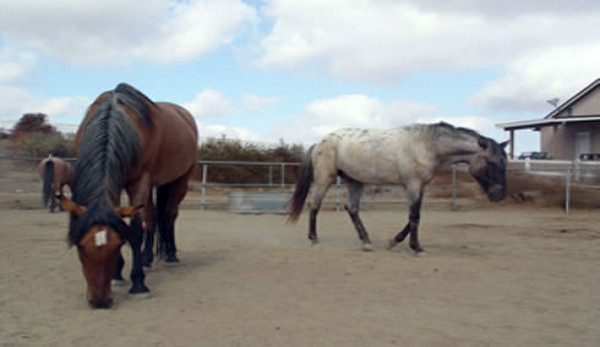 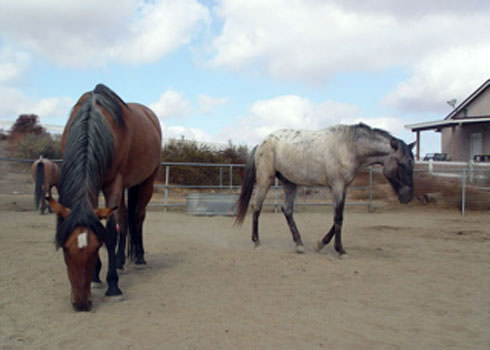 Rio passes Stella with one eye on her.

My Spanish Mustang, Rio, is definitely a 13-year-old boy in horse’s clothing. He’s a sweet thing who’d never deliberately hurt a fly, but he can run you down and knock you to the dirt without even thinking about it just because he wants to “engage.”

After several months of struggling to teach him to respect the space of the humans who were handling him, I decided he needed some lessons from his peers. Milagro was of no help to me, because he treated Rio like he was his surrogate mother, allowing him all kinds of misbehaviors with barely a correction. Red, on the other hand, was more than happy to kill Rio given the chance. But since my small urban farm doesn’t provide enough room to safely turn Red and Rio out together, I couldn’t allow Red the privilege of teaching Rio how to behave. 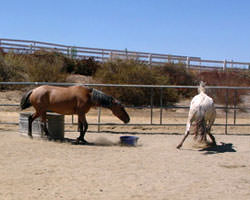 Stella shows Rio who is top horse at feeding time.

So, in stepped my friend Kelly, who is my mentor in the Spanish Mustang breed. She kindly offered to take Rio to her 2-acre property and turn him out with her herd of very opinionated Spanish Mustangs: Stella, Wyakin and Chief. She explained that after at least a month of living with these three adult horses, Rio would learn all about respect, how to get out of the way (or else) and what it’s like to be at the bottom of the pecking order. All this would translate (hopefully) into a more respectful young horse, even with humans. So in early August, Rio was shipped off to Camp Spanish Mustang.

Watching the herd dynamics has been fascinating for me. Stella, who is an assertive lead mare, immediately put him in his place and has continued to do so for the past six weeks. Wyakin, an older gelding, has become his buddy, though only after making sure Rio knew who was the boss. Chief, who happens to be Milagro’s full brother, essentially ignored Rio, letting Stella keep him in line.

The end result so far is my once-pushy 2-year-old has learned that he is no longer top man in the world. He has learned to dodge Stella’s bared teeth and flying hooves with incredible grace and humility, all the while appearing to be happy to be part of this very special herd.

Rio will be coming home to Milagro and Red soon, hopefully a new young man with a better attitude. I will need to reinforce the training he received from Kelly’s herd and basically take over Stella’s role, and that will be challenging for me given the fact that she outweighs me by quite a bit. But I’m confident with the right reinforcement from me that this experience will help Rio grow into a respectful horse who will be a real joy to be around.

Audrey Pavia
Keeping farm animals in the city can be a real hoot. Follow freelance writer Audrey Pavia’s adventures in Southern California with a yard full of urban livestock, including horses, chickens, a Corgi and an urban barn cat. She somehow manages all these silly critters while working full-time, with no one to help her but her husband, Randy, a born-and-raised New Yorker. And you thought “The Simple Life” was out there? ]]>