Audrey Pavia’s blog – Rio Lives On – Urban Farm OnlineAudrey Pavia, Rio, thrushKeeping horses on a small urban lot has its challenges. One of those is keeping their feet free of infection.I had him tied to the hitching post, and I cleaned out his feet and sprayed something called Thrush Buster on the undersides […] 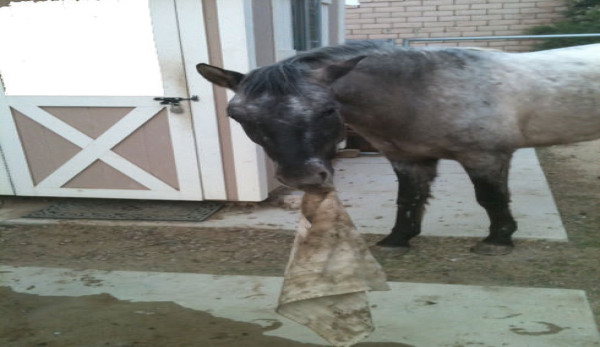 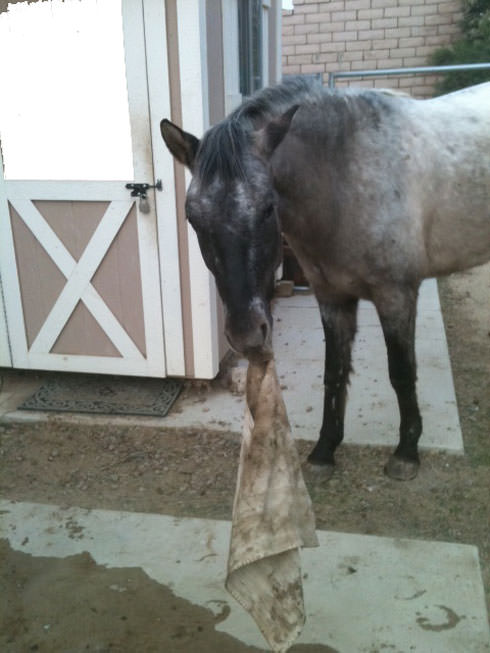 Rio playing with a dirty towel — much safer than rubber gloves!

Keeping horses on a small urban lot has its challenges, such as keeping their feet free of infection. In the wild, horses never stand in their own urine and feces, but in a small 12×24-foot stall, this is inevitable.

My horses are barefoot, and when they stand in their own waste, their feet come into direct contact with a lot of bacteria. This stuff — commonly known as thrush — eats away at the underside of the hoof and can cause problems. That’s why my farrier is always after me to keep those feet clean.

So today, I was outside working on Rio’s hooves. I had him tied to the hitching post, and I cleaned out his feet and sprayed something called Thrush Buster on the undersides of his hooves. This stuff works, but it is noxious. Heaven help you if you get any of it on your hands; you’ll smell like a chemical factory for a week. So, I wear rubber gloves — the bright-yellow kind you buy at the grocery store for dishwashing.

After I finished applying the thrush stuff on Rio’s feet, I took his halter off and let him walk around the back part of the yard so his feet could dry off before I put him back in his stall. I took my gloves off, tossed them on a little bench next to the hitching post, and then got out Milagro.

I was working on Milagro’s feet when, out of the corner of my eye, I saw Rio hovering by the bench. Before I could react, he reached down and sucked one of the bright-yellow rubber gloves into his mouth.

“Rio!” I yelled, but it was too late. He whirled around and took off, with the glove hanging out of his mouth. I started after him, which made him move even faster. Pretty soon, he was cantering around the back area. At this point, the glove was no longer visible. He had sucked the entire thing into his mouth.

Panic gripped me. My mind was screaming: “Dead horse! Dead horse!” Scenes of horse hospitals and through-the-roof estimates for surgery to retrieve the glove all added up to one thing: I’d have to put Rio down.

Frantic, I ran after him, hoping that, if I kept him moving, he wouldn’t be able to swallow. That is, if he hadn’t already. The glove was nowhere to be seen. I didn’t know what to do, until I saw half the glove come back out of his mouth for a second before disappearing again. It was still in there. How could I get it away from him?

Horsepeople tend to be able to think well in emergencies because we have to, and the solution came to me in a flash. I ran to the tack shed and pulled out a jar of horse treats. I shook it and yelled “Rio, look what I’ve got!”

My little Spanish Mustang stopped in his tracked, ears up, a light in his eyes. “Yum!” I could almost hear him saying. He spit out the glove.

I went up to him and gave him a treat, and swooped down to pick up the yellow thing, which was completely intact but dripping with horse saliva. I was so relieved, I nearly cried. Rio would get to live after all.

Audrey Pavia
Keeping farm animals in the city can be a real hoot. Follow freelance writer Audrey Pavia’s adventures in Southern California with a yard full of urban livestock, including horses, chickens, a Corgi and an urban barn cat. She somehow manages all these silly critters by herself while working full-time. And you thought “The Simple Life” was out there? ]]>