Audrey Pavia’s Blog – Rio Returns – Urban Farm OnlineRio ReturnsMy Spanish Mustang, Rio, will be 3 in January. That’s when his serious training will start. He’ll get a rider on his back and will learn all about leg cues and rounding out his body as he moves.training horses, horse, Rio, Audrey Pavia, Spanish MustangBut […]

Keeping farm animals in the city can be a real hoot. Follow freelance writer Audrey Pavia’s adventures in Southern California with a yard full of urban livestock, including horses, chickens, a Corgi and an urban barn cat. She somehow manages all these silly critters while working full-time, with no one to help her but her husband, Randy, a born-and-raised New Yorker. And you thought “The Simple Life” was out there 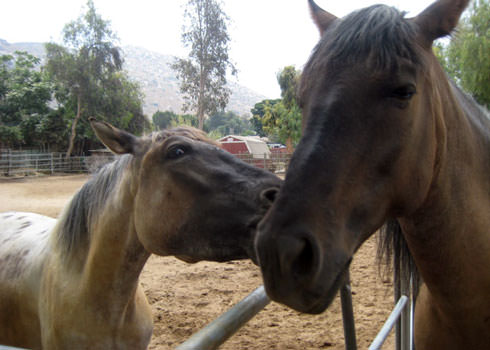 Rio was pretty rude to Milagro before his stint at Spanish Mustang Boot Camp.

My Spanish Mustang, Rio, will be 3 in January. That’s when his serious training will start. He’ll get a rider on his back and will learn all about leg cues and rounding out his body as he moves.

But all young horses need a foundation before they are ridden, and Rio got some of his at what I call Spanish Mustang Boot Camp at my friend Kelly’s place in August and September. Rio spent two months with Kelly’s herd of Spanish Mustangs, learning what it means to take orders from horses higher up in the pecking order.

Rio came home a couple of weeks ago, back to my other Spanish Mustang, Milagro, and my senior citizen Quarter Horse, Red. Before Rio went off to boot camp, he was pushy and annoying. He doesn’t have a mean bone in his body, but he sure could be a pest. He had no respect for his human handlers’ personal space, and would crowd me, Randy or anyone else who was working in his stall, leading him or just standing in his general vicinity. And heaven help you if you were holding something in your hand that he wanted. He had no problem walking into you and bowling you over, right onto your back.

Rio wasn’t much better with other horses. He took liberties that no young horse should be allowed to take. He didn’t respond to Milagro’s feigned aggression, and soon learned there was no bite behind Milagro’s bark. The consequences were a complete lack of respect for a horse 6 years his senior—outrageous in the world of horses. He tried mounting Milagro when I’d pony him, and try to steal his hay through the bars of his stall. Red, who may be aged but is certainly no slouch, didn’t have much luck schooling the young troublemaker. Rio wouldn’t even budge when Red would bite his rump to get him to move out of the way.

After spending time in Kelly’s herd, Rio is now a different horse. Now he hustles when Milagro pins his ears, and steps obediently out of the way when Red moves toward him. After a few sessions with Kelly and a dressage whip, he has also learned to stay out of his handler’s personal space—a concept that was reinforced by Kelly’s herd, which taught Rio that something like personal space actually exists.

The rude little gelding who left my urban farm two months ago has been replaced by a humbler, more docile guy who is ready for the next stage of his training. I’m so excited at the idea of riding him in the near future. Now that I see how capable he is of being a good boy on the ground, I have high hopes for him under saddle.