Photo by Rick Gush Arundo, also known as river bamboo, is abundant in Italy. I know this plant is a pestiferous weed that really has caused some serious trouble by out-competing native riparian ecologies, but I still think of it as a crop plant that I look after in connection with my garden. River bamboo, […] 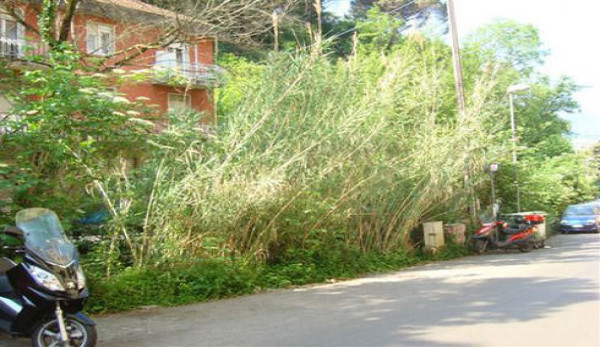 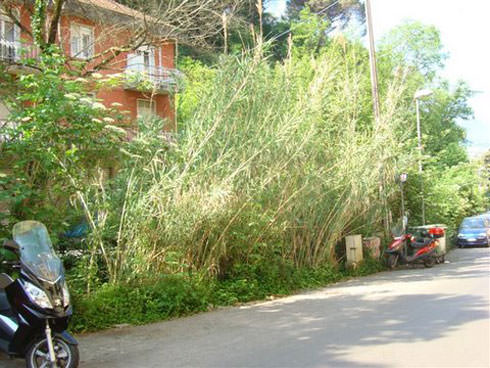 Arundo, also known as river bamboo, is abundant in Italy.

I know this plant is a pestiferous weed that really has caused some serious trouble by out-competing native riparian ecologies, but I still think of it as a crop plant that I look after in connection with my garden. River bamboo, Arundo donax, is also known as arundo, though everybody here in Italy calls it canna or cane.

I use arundo as garden stakes and, although I need more than my own little stand can provide, I still manage the little arundo stand that is growing above my garden as if it were a forestry project.

The first thing to remember about arundo is that it is a pest that should not be spread negligently. The severed pieces of roots will re-grow very easily, so the roots or stems should never be disposed of in a waterway of any kind. (Not that I can think of much that I think is appropriate to be disposed of in a waterway â€¦ maybe a glass of water or perhaps some breadcrumbs brushed off the front of my sweater?)

The most important fact about arundo crop management is that there is a relationship between the mass of roots and the capacity of the plant to produce full-size shoots. The biggest shoots can be about 2 inches in diameter at the base, and those big shoots make the generally most desirable garden stakes. An overcrowded patch will reduce the tendency to produce full-size canes, so good arundo forestry practice is to prune out all of the undersize and crowding shoots. A caneâ€™s size is determined by the size of the shoot when it first emerges from the roots. Smaller canes will never increase in height nor diameter.

Another problem with arundo is that the long stems are often curved, and sometimes extremely so, but the straighter stems are much more useful. The curved stems are caused usually by overcrowding, so pruning of arundo stands is a good practice.

Arundo canes will form from shoots that rise from the root mass in spring and grow to their full height by midsummer. These tall canes can be harvested in the fall, but if they are left to overwinter and then harvested the following spring or summer, the canes will be considerably tougher. Yearling canes are fairly weak, and rot very quickly when used in garden soil. Canes that have passed a winter while still attached to the root mass are much stronger and also more resistant to rotting in moist soil.

Back in California, I would sometimes go out in the spring and hack out some arundo root pieces that have fat new shoots just emerging. These sections of root could then be planted into nursery pots and the young shoots would then develop very nicely and thickly. I made some very inexpensive, tall, temporary houseplants in this way, as the canes would grow to more than 6 feet tall, quickly. I particularly liked the variegated arundo for temporary houseplant use. But this wasnâ€™t a long-term solution because the following year, the new shoots on those plants would all be tiny, since the root masses were so severely reduced.

Actual arundo farming is a still a big deal just up the coast in Cannes, France, and the industry that provides cane sections to be used in woodwind musical instruments is headquartered nearby. To produce the best cane for musical-instrument use, growers will submerge bundles of cane in the river for a few years to develop the desired combination of toughness and flexibility.