Photo by Rick Gush Though an invasive speices in some places, Arundo (or river cane) has many uses. I know river cane (Arundo donax) is a nasty weed in some places, like California, and that it displaces many native species in riparian habitats, thereby destroying local ecologies. I urge all gardeners and farmers to treat […] 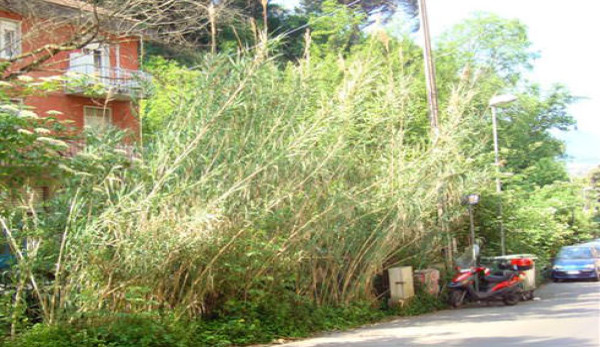 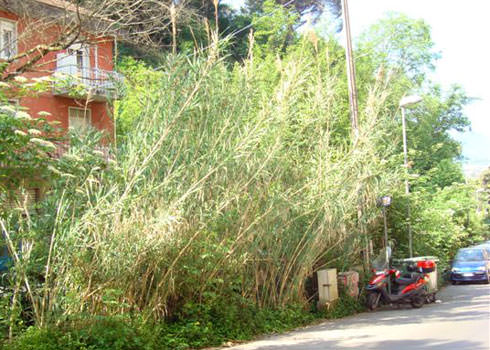 Though an invasive speices in some places, Arundo (or river cane) has many uses.

I know river cane (Arundo donax) is a nasty weed in some places, like California, and that it displaces many native species in riparian habitats, thereby destroying local ecologies. I urge all gardeners and farmers to treat Arundo with appropriate responsibility and avoid helping this pest grow into new areas where it should not grow.

That having been said, Arundo is a remarkably useful plant. In many third-world countries, Arundo canes are a common construction material. Farmers and gardeners all over the world use large quantities of Arundo as plant supports. I myself heavy rely on Arundo and usually harvest up to 50 new canes every year for the various climber trellises and bean and tomato supports for the garden.

Arundo shoots grow up from a shallow but amazingly robust underground mass of roots. The first-year shoots are brittle and break easily until they elongate and harden. Even then, new first-year canes are poor stake material until theyâ€™ve had a winter to harden up the stem. Harvesting 1-year-old canes in February or March is OK, as the stems will be sufficiently durable by then.

The key concept here is that the canes will not get any larger after the first yearâ€™s growth. If a stem is 1 inch in diameter during its first summer, it will always be that diameter.

Going into an Arundo patch each year, cutting out the biggest canes and leaving all the rest will gradually diminish the sizes of the canes produced and make the patch produce more curved canes. A thick and straight cane is formed when the young shoot enjoys a clear area and has little competition. If, however, all the small canes are left on a patch, then these act as serious competition for the new shoots, which usually grow out smaller in diameter and often in a curve that seeks the light.

I urge all Arundo users to engage in vigorous pruning when they harvest canes. Taking a few minutes to cut out all the small canes in a patch will leave room for the new shoots to grow to their fullest potential. Be careful, though, because if one is cutting when the new shoots are appearing, these are so brittle that they can be broken just by brushing against them.

Up the coast in Cannes, France, (Cannes in French means â€ścanesâ€ť) the huge patches of Arundo are harvested to make the reeds for woodwind instruments like saxophones, clarinets and oboes. Two-year-old canes are cut, bundled and submerged in the river for up to 10 years in order to develop the best combination of durability and flexibility.