Photo by Audrey Pavia My chickens were so hot this last weekend, they dug areas in the mulch, which stays cool and moist. While the East Coast was being battered by Hurricane Irene last weekend, the West Coast was sweltering in a heat wave. No one knows this better than my poor chickens. Because my […] 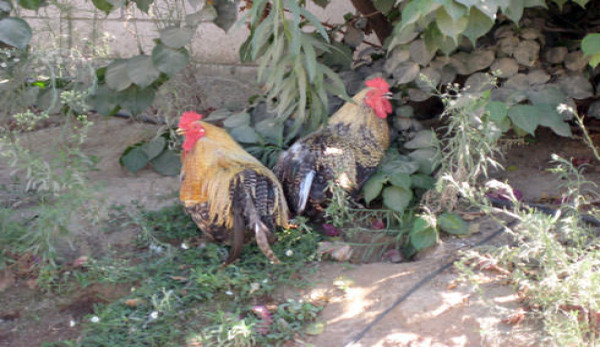 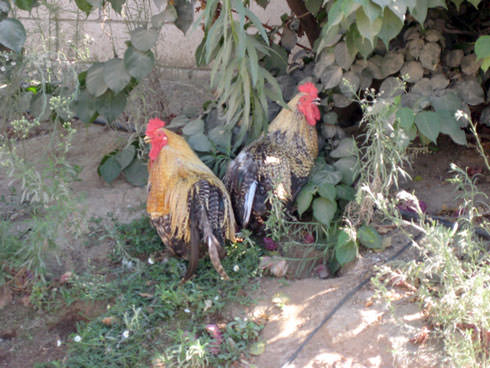 My chickens were so hot this last weekend, they dug areas in the mulch, which stays cool and moist.

While the East Coast was being battered by Hurricane Irene last weekend, the West Coast was sweltering in a heat wave. No one knows this better than my poor chickens.

Because my flock has the run of the yard, they get to make their own decisions about how to best deal with the rising temperatures. Iâ€™ve heard stories of chickens dying from heatstroke when kept in coops during particularly hot weather, but Iâ€™ve had a lot of luck with my birds, which are left to their own devices.

On Saturday, when temperatures climbed to 105 degrees Fahrenheit here, my chickens made their way under the covered patio and took up residence in a flowerbed that juts up against the house. I once had begonias there, but they were devoured, either by snails or a wild rabbit; Iâ€™m not sure which. The bark chips I used for mulch are still there, keeping the soil underneath cool and moist.

During the hottest part of the day, the chickens scratched out depressions in the bark deep enough to get to the damp soil beneath. They then nestled in the coolness of these depressions, their hot little bodies pressed up against the wet dirt.

At other times during the day, I found them lounging underneath the coyote brush on the back slope. Not only does this area provide shade, but the dirt stays cool and moist after being doused by the automatic sprinklers, which go off every morning at 5 a.m.

Whatâ€™s funny is that the flock constantly moved around during the day, switching spots rather frequently. They dug new depressions in the dirt or hunkered down in the shade in other areas. Occasionally, they ventured out to drink water, which I kept under a cool rose bush.

Iâ€™m guessing they moved around so much because the spots they huddled in didnâ€™t stay cool for too long. Chickens throw off a tremendous amount of body heat, and those cool depressions probably started to feel pretty warm after awhile.

Iâ€™ve tried setting up misters for the chickens in the past, thinking they would stand under them to cool down. It took me a while to realize they werenâ€™t ducks and wanted nothing to do with a spray of water from a garden hose coming down on them. Iâ€™ve also tried giving them chunks of cold fruit from the refrigerator. Although they appreciated the fruit, I donâ€™t think the â€ścoldâ€ť part made much difference to them.

In the end, I decided itâ€™s just best to let them figure it out on their own. They seem to know what they need and have so far managed to survive this summerâ€™s hottest days. Should the temperature rise to 112 F, which it has done in the past during this time of year, I may need to intercede. For now, Iâ€™ll let my chickens handle things on their own.