Robbing is just what it sounds like, and it happens to strong hives. Here's what to look for and how to prevent it. 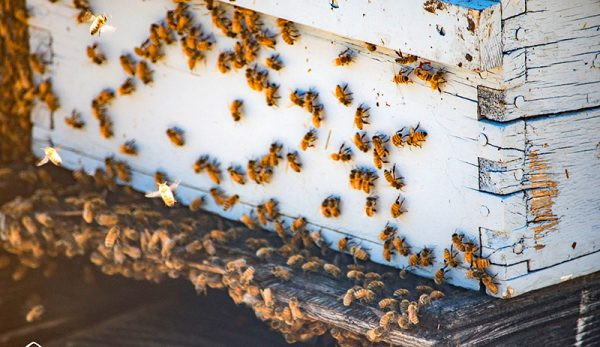 Summer is an abundant time: Sun shines and nectar flows. By now, your bees are packing away the honey and building up their populations. Most healthy hives are (relatively) maintenance free by early summer. But part of what makes hives so easy to manage for the beekeeperâ€”healthy populations and abundant honey storesâ€”also makes them targets for robbing.

Beekeepers use the term robbing to mean the taking of stores from one hive by either the members of another hive, or other bees and wasps. Though robbing is more common later in the summer, it’s good to be aware of it now and know what signs to look for. This will help you be prepared to fend off later season attacks.

Here’s your best course of action as a beekeeper against robbing:

This, of course, is always the goal, and always the remedy for just about any honeybee ailment. “Strong” colonies are those with ample numbers, healthy bees, minimal varoa mite count, little to no pests, no diseases and a healthy, vibrant queen.

When it comes to hive inspections or honey harvests, don’t leave equipment lying around or might lead to robbing. Equipment, such as hive tools, old frames or any other item that’s been within the hive box that has the potential to be covered in honey, should be taken indoors and stored immediately after use. Leaving these out invites trouble, simple as that. Other bees as well as yellow jackets, wasps and ants are among critters attracted by the mess, and they come in droves. Even leaving equipment out for an hour could be enough to signal to neighboring colonies that food is available for the taking.

3. Monitor the Entrance and Use Preventative Measures

What does robbing look like? You might see non-honeybee insects such as wasps attempting to enter the hive through the entrance. If your guard bees are strong, they will fight the potential robbers off at the entrance. Sometimes, honeybees from neighboring hives will take to robbing, and this will look like your bees fighting each other at the entrance. Watch carefully and look for evidence of any trouble. If you see signs of robbing (dead bees or wasps is one sign), install entrance reducers to give your bees an advantage. Entrance reducers are small wooden planks that make the opening of the hive smaller, so your bees have to defend less area.

A note on entrance reducers: Don’t leave them up all season, and use them periodically as needed. Because they make the entrance to the hive smaller, it does slow down the flow of workers going to and from the hive on foraging adventures. This could reduce honey production, so use them only when absolutely necessary.

The good news remains the same: Strong hives are better able to defend themselves and continue to grow. If you give your honeybees the tools (and sometimes space) they need to thrive, you’ll face less hurdles as a beekeeper such as robbing and experience more ease and joy.