These two Kentucky farmers are supplementing their farmers market income with geodes and agate they forage for on their property. 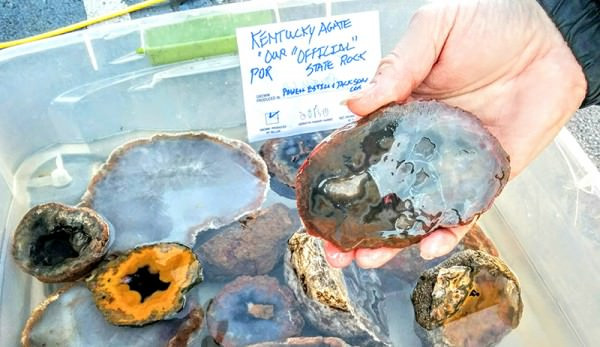 In Kentucky, where I live, some farmers are harvesting unique local products that reach back millions of years. At the local farmers market, they display sparkling geodes and brightly striped agates among the lettuces and tomatoes. Roland McIntosh and Lonnie Wilson have been walking the hills and creeks on their properties for years to forage for gems among the rocks. These farmers are amateur geologist foragers, also known as rockhounds.

Geodes and agates lay deep beneath Kentuckyãs limestone between, spanning back to 250 to 275 million years ago. In a program that airs on the local public television station, McIntosh explains that just as diamonds are formed from carbon, geodes are formed from silicon dioxide, which becomes a form of quartz known as agate.

Rockhounds often find their treasures by searching in or near creek beds, where erosion has cut away the top layers of earth. In some types of geodes, the agate appears as veins or hollows lined with clear, white or topaz crystals.

In other types, trace minerals combine with the microscopic quartz in the agate to form decorative bands of color in stripes of milky opal, vibrant orange red, umber yellow, rosy pink, jet black and more.

Wilson, of Hoot Owl Holler, sells his geodes as he find them on the hills alongside his creekbed, with crystals or veins of quartz showing naturally through holes and breaks in the rocks. Sales can supplement his income by about $50 to $100 per market day, on a good day. A benefit of this special local product is that they are nonperishable items that can be sold at market in early spring and late fall when harvests are low, and they are favorite items for tourists at market to purchase.

McIntosh is widely known in the area as an agate expert and collector. His book Kentucky Agate: State Rock and Mineral Treasure of the Commonwealth (University Press of Kentucky, 2013) shows a fantastic collection of agate, and he personally cuts and polishes the minerals found on his property. Some of the polished roundsãknown as cabochonsãare sold to local jewelers, and he often attends gem and mineral shows. At the farmers market, Rolandãs booth is seasonally stocked with pawpaws, sassafras, wineberries, rhubarb, and other interesting foraged or perennial products, but one permanent stand-by are his two tubs full of Kentuckyãs mineral treasure.

If you’re looking for a way to supplement your own farmers market sales, take a cue from these two and perhaps look beyond agriculture for other resources your land may provide.

Rachael Dupree is the former managing editor for HobbyFarms.com. She grows food and medicine on her 50-acre farm near Lexington, Kentucky. When not out working her land, you can find her in her kitchen not following recipes, on her yoga mat in a satisfying pigeon pose, or exploring the worldãs nooks and crannies. Follow her on Instagram @rachael_dupree.