What Historical Farm Relics Lurk In A Pile Of Rocks?

A large pile of rocks, disappearing into the ground under years of accumulated leaves and grass, offers an intriguing mystery about what else is "hiding." 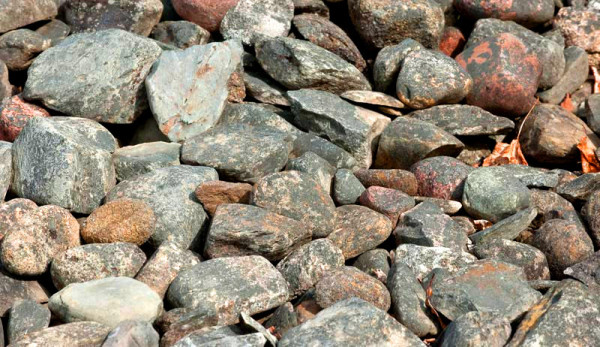 Itâ€™s funny how much things can change without us noticing. Cute little spruce trees grow up into imposing specimens that encroach on their surroundings. Wooden buildings weather over time and require a fresh coat of paint. Huge piles of rocks (and who knows what else) disappear under years of grass and leaves.

Yes, believe it or not, on my farm there is a pile of rocks, of seemingly impossible size, that has all but disappeared under the ground. Thatâ€™s a good thing most of the time, except when youâ€™re trying to work in the area and you keep encountering hidden rocks and their human-made companions. (More on that in a moment.)

The rock pile was created decades ago by the original owners of the farm, who cleared the rocks from the fields and piled them along the edges in long, rough rows. Some of these piles are still clearly visible, but this oneâ€”which ran parallel to a fence that no longer existsâ€”is all but invisible today, buried under the soil created by decades of grass, leaves and similar materials.

However, its influence is still widely felt. The long pile of rocks has left a small but noticeable hump in the ground, and the tops of individual rocks still jut out of the ground in various places, making it difficult to mow the grass. And when I’ve tried to dig up one rock, well, letâ€™s just say I’ve found the pile pretty quickly and wound up removing more rocks than I’d bargained for.

But perhaps the wildest revelation concerning this hidden rock pile came a few months ago. For many years, a walking path has roughly followed the rock pile, and years of walking have eroded the ground to the point that items buried in the soil are starting to emerge. For the most part, these items have been rocks (of course) and tree roots, but this year the ground started growing bricks.

While only the corners have emerged so far (and Iâ€™ve done no digging to investigate further), itâ€™s already clear that these bricks are similar or identical to the ones I found nestled next to a pine tree last year. Now my curiosity has been sparked and questions abound. Why are bricks evidently piled alongside the rocks? How long have they been there? And if there are bricks, what else might be buried there?

Knowing how the previous farm owners liked to use piles of rocks as places to keep all sorts of random items (parts from an old Model T, anyone?), I guess I shouldnâ€™t be surprised by these bricks, but I am intrigued. While more productive farming projects must take priority over any mystery-solving excavation mission, I do plan to do some digging in the future to learn more about this â€śburied treasure.â€ť

Besides, I wouldnâ€™t want anyone to trip on the corners of the bricks.