The roly poly offers a great introduction to your soil life and understanding the mysterious, complex world of the overlooked and underfoot. 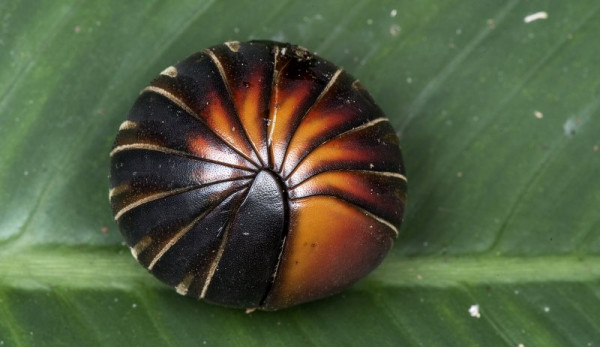 Sow bug, pill bug, armadillo bug, roll-up bug, woodlouse — there are many common names associated with the creature I remember from my early childhood as the roly poly. The scientific name for the most common roly poly is quite descriptive, Armadillium vulgare. Roly polies are the small, segmented, dark gray, flattish bugs I used to love finding as a kid when I would turn over rocks and bricks. When I touched them, they rolled into a tight little ball. Cautious and secretive, yet very resilient and resourceful, I’ve always admired the roly poly.

The Roly Poly vs. The Millipede

Roly polies are not millipedes. Iâ€™ve been confused about this, and for good reason. Millipedes have that same segmented, armored exoskeleton, and they roll up in a ball when disturbed. In Europe there lives a roly poly look-alike that is a millipede, commonly called the pill millipede. Pill millipedes are in a different scientific order, one named for its resemblance to the roly poly. There is at least one way you can tell them apart: Like all millipedes, pill millipedes have two legs per segment of the body whereas roly polies have only one leg per segment.

The Roly Poly vs. The Sow Bug

Sow bugs and roly polies are closely related but slightly different. Both are types of wood lice, a suborder of 5,000 different species. Sow bugs are not able to curl into the protective ball, but they are compensated with two tail-like appendages that extend from their abdomen.

The Roly Poly Is A Crustacean With A Marsupial-like Feature

If you think of lobsters and shrimp when you think of crustaceans, a roly poly might seem like a very unlikely family member. These tiny tank-like creatures are among very few of their kind that have adapted to a terrestrial lifestyle, but they have not lost their water-loving qualities from their ancestral origins. To breathe on land, their lungs evolved in an unusual locationâ€”their paddle-shaped hind legs. Like marsupials (and our common garden friend, the opossum), the roly poly mother carries her young in a pouch, called a marsupium, on her belly. For some species, the mother might hold hundreds of eggs in this water-filled reservoir, and after the eggs hatch, they stay there as long as two more months, longer than some insectsâ€™ entire lifespan. Roly polies, however, are not insects. These crustaceans can live as long as two years.

The Garden Roles Of The Roly Poly

While hundreds of different species of roly poly and other Armadillids exist natively in tropical and Mediterranean regions of the world, most of what we see in North America are probably introduced species, brought in soil from ships’ ballasts or in potted plants.

All wood lice are detritivores, which means they feed on decaying organic matter, along with the fungi and bacteria that is also present and actively helping the decomposition process. Like earthworms, they create compost, help aerate soil and move nutrients around underground. Occasionally, they might damage plant roots, but this is unlikely. They pose no threat to buildings or sound wooden structures.

Crustaceans, even these land-dwellers, need a moist environment. They wonâ€™t survive long indoors or on dry, exposed surfaces. Rolling into a ball could help them retain their bodyâ€™s precious water, as well as protect their vulnerable soft parts from a predatorâ€™s fangs, such as spiders and centipedes.

If you see a number of roly polies in your house or along sidewalks, pay attention. They could indicate a soggy spot or unwanted dampness. The Texas AgriLife Extension Serviceâ€™s Urban Integrated Pest Management suggests the following to prevent a household intrusion of roly polies or similar water-loving critters.

Focus on the outside of the structure to exclude them. Once things dry out, then it should go back to normal.

Also noteworthy, roly polies are well acquainted with minerals in the soil. Their body armor requires a good deal of calcium, and they seek out copper and zinc, which possibly lends them an unpalatable taste and helps fend off predators. They avoid toxic metals such as lead, so itâ€™s a clue to your soil quality if you find their presence. Urban farmers and gardeners should get a complete soil test to confirm their observations. Roly polies can be great introduction to your soil life and understanding the mysterious, complex world of the overlooked and underfoot.