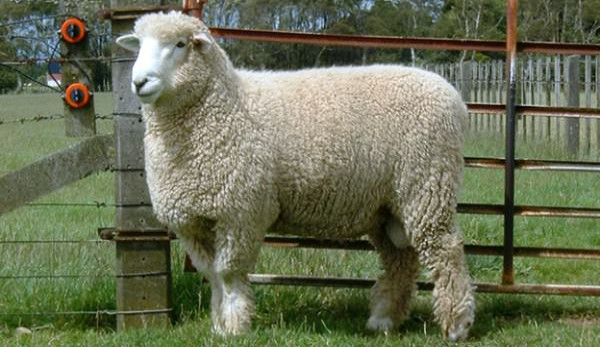 Use: The dual-purpose Romney has been valued for both meat and wool throughout its history. The large, well-muscled lambs efficiently produce high-quality, lean cuts of meat on pasture, while mature sheep give around 8 to 12 pounds of fine wool each year. Easy-to-spin Romney fleece delights hand spinners with its long and lustrous separate locks, low grease content and range of natural colors (its spinning count runs 40 to 48). This versatile wool can be used for a huge variety of projects, from sweaters to rugs.

History: The Romney breed emerged over 250 years ago in a green, soggy, wind-swept region of Kent county in southeastern England, its ancestor a hardy old breed aptly called the Romney Marsh sheep. An efficient provider of wool and meat, the Romney sailed to New Zealand, where it has since become the most numerous sheep breed. William Riddell of Monmouth, Oregon, brought the first of these sheep into the United States in 1904. Both English and New Zealand lines have contributed to the improvement of present-day Romneys in North America.

Conformation: These burly polled sheep come thickly cloaked in wool of either white or natural colors, including cream, black, brown, gray and silver. They have a blocky build, strong legs, moderately sized ears and an open, wool-free face from the eyes down. Adult Romney rams weigh 225 to 275 pounds; ewes, 150 to 200 pounds.

Special Considerations/Notes: Thanks to their Kent, England roots, Romneys adapt especially well to lush, rainy temperate climates, such as those on the West and East Coasts (to arid regions, not so well). The ewes generally lamb with ease and make good, calm mothers.