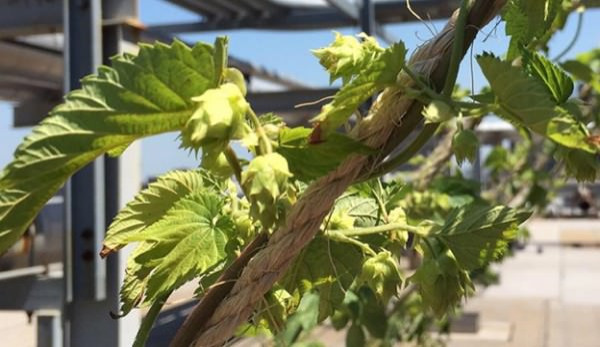 Keely Gerhold and Katrina Ceguera met in 2013 when they worked on a nonprofit that benefitted community gardens. After the New York State legislature passed the Farm Brewery Bill (a bill that encouraged local breweries to get their ingredients from local farms), Gerhold and Ceguera “saw this opportunity, especially in New York City where all these breweries are popping up, to be on the forefront of the bill,‚ÄĚ Ceguera told Gothamist. “We were hoping to position ourselves to be this really hyper-local thing for New York City brewers to take advantage of, to have ingredients from walking, biking distance of wherever they‚Äôre brewing.‚ÄĚ

The business partners created Tinyfield Roofhop Farm, an urban farm that “seeks to offer local breweries a unique product that’s more difficult to source. While most breweries use preserved, pelletized hops in their brews, Tinyfield Farm offers fresh hops, known as wet hops, that must be used within 72 hours after the harvest and offer a less bitter alternative to dried hops,‚ÄĚ Gothamist reports.

The farm is located on the rooftop of the Pfizer Building, which was sold in 2011 and now houses various small food manufacturers. So far, Tinyfield Roofhop Farm has worked with Lithology Brewing of Long Island to provide hops for a 100-gallon batch of Lithology Tinyfield Amber Ale. Now Gerhold and Ceguera have launched an¬†Indiegogo campaign to raise additional funds “to buy the plants, expand their production of salad greens in the greenhouse and build an event space to host guests under a living arbor of trellised hops.‚ÄĚ At press time, $5,359 was raised of the $20,000 goal. There are five days left in the campaign.

To learn more about Tinyfield Roofhop Farm or to contribute to the Indiegogo campaign, visit the farm‚Äôs website.