Courtesy Audrey Pavia Mr. Mabel the rooster escorts one of his hens around the urban farm. Whoever said chivalry is dead never spent any time around roosters. Sometimes I just can’t get over how gracious and doting roosters are with their hens. At my urban farm, Mr. Mabel is the top roo (beating out his […] 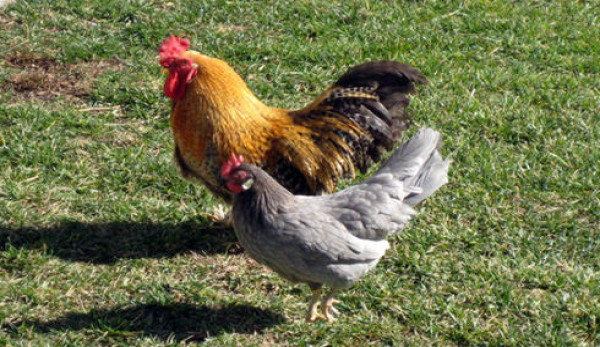 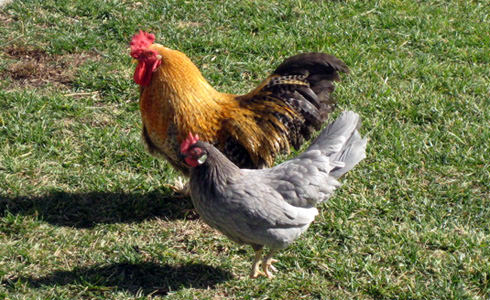 Mr. Mabel the rooster escorts one of his hens around the urban farm.

Whoever said chivalry is dead never spent any time around roosters. Sometimes I just can’t get over how gracious and doting roosters are with their hens.

At my urban farm, Mr. Mabel is the top roo (beating out his brother Mr. Molly, at least this year). Mr. Mabel deserves to be the guy in charge because nothing is as important to that rooster as his five hens.

Mr. Mabel spends much of his day looking for good stuff to eat. Not for himself, mind you, but for his girls. If he comes upon some grubs in the dirt or if I toss out a piece of fruit on the lawn, he summons the ladies like only a rooster can: by dipping his head and making a distinct clucking sound that is only used for such an occasion. The hens know exactly what this means, and they come running from every direction to see what their man has found for them.

This ritual is particularly impressive on the rare occasions when I bring home a container of mealworms. I sit down on the ground and call Mr. Mabel, who runs over, sees that a mealworm feast is about to occur, and begins to call his harem. When they come running, he feeds them, taking each mealworm from my hand and placing it in front of a hen. What’s so amazing is that he will hand out at least 10 mealworms to the girls before eating one himself. And I know how much he loves mealworms. But the ladies come first.

Mr. Mabel is also a guy you can count on in times of trouble. If I disturb one of the hens as she attempts to hatch an egg in the coop (not allowed—we don’t need any more chickens), the loud squawk of objection quickly gets the attention of Mr. Mabel. He comes running as fast as he can to see what is going on, and gets in my space. He doesn’t know what it is I’m doing to upset his lady, but it doesn’t matter. She’s in distress and he’s the man on the job.

Of course, all this gallant behavior comes with a price. When Mr. Mabel is in the mood for love, “no” is not an acceptable answer. The hens have learned that if they want first dibs at the mealworms and someone to rescue them when times are tough, they need to make it worth his while. And they do, with rarely a complaint.