Our Unexpected Guest on Christmas Eve: A Rooster in Crisis

Our holiday took a surprising twist when Fat Boy took alarmingly ill. Was it cold-weather exposure or one of two diseases that could sicken our other birds? 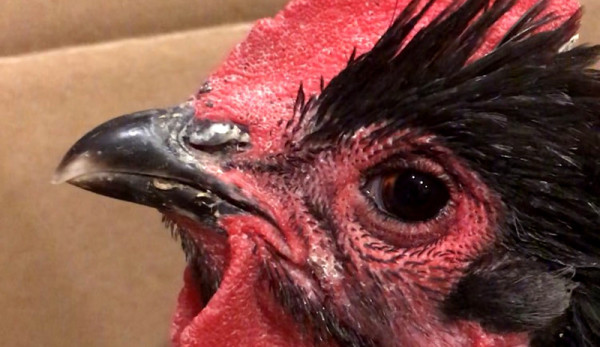 Christmas Eve dawned with sheets of white blowing mercilessly through the air and swiftly accumulating on the ground. Groaning, I handed my sons a bag of dried mealworms and asked them to please open all the coops and scatter the treats inside for those birds smart enough to stay indoors. I left the poultry tending in their capable hands while I tended to baking, cooking and otherwise preparing for the festivities to come.

At 5 p.m., 30 minutes before we were due at a family Christmas get-together, I was still dashing around the kitchen, putting the finishing touches on what I‚Äôd prepared. Feeling a little stressed, I asked my 14-year-old son, Jaeson, to please go outside and lock up. As he slipped into his coat he suddenly stopped.

‚ÄúThat‚Äù was a large black lump standing beneath our Orpington coop, unmoving in the blinding snow.

It was not. A few minutes later, Jaeson burst into the kitchen, our Black Orpington rooster, Fat Boy, in his arms. Fat Boy‚Äôs beak was wide open, his breath rasping loudly as he struggled for air. A thin layer of ice covered his wings, comb and feet.

Running for a towel, I quickly wrapped Fat Boy and held him close to share my body heat with him. Jaeson dashed to our spare room for an empty carton, added pine shavings and set it next to the desk in my office. We took turns holding the poor rooster until we felt him relax.

He said it looked like Fat Boy‚Äôs brothers, Big Boy and Thomas, staged a coup and either forced Fat Boy outdoors or refused to let him back into the coop. Either way, the poor chicken had spent the whole day out in the blizzard, without food or water. Sending Jaeson to get a bowl of feed, I called for my oldest, Michael, a second-year vet student at Michigan State Universtiy. He quickly examined the ailing bird.

‚ÄúHe‚Äôs sneezing and coughing,‚Äù Michael said, gently setting Fat Boy into the carton. ‚ÄúHis breathing is labored, and his throat sounds like it‚Äôs closed up. I think this is either mycoplasma or infectious laryngotracheitis. We all need to wash our hands very thoroughly.‚Äù

That was a given, even if Fat Boy weren‚Äôt symptomatic. He showed no interest in the feed nor in the water bowl Jaeson offered. Knowing we were now late for dinner but unwilling to leave the poor rooster, I quickly put some hydrating gel in with Fat Boy then covered his carton with an old towel to let him sleep.

We returned hours later to find him sitting in the kitchen, yards away from his overturned box, calmly waiting for us. While Michael scurried to clean and disinfect everything and set Fat Boy‚Äôs carton back up, I offered the rooster food and water, both of which he eagerly accepted. We found no trace of the hydrating gel.

I took these as excellent signs: Fat Boy had warmed up, eaten his gel and regained enough energy to move around. Michael remained skeptical, however, because the bird‚Äôs breathing was still quite raspy. Heeding the threat of disease, he suggested putting the rooster out in the garage. I immediately vetoed that: The garage was almost as cold as outside, and I didn‚Äôt want to expose the struggling rooster to stressful conditions similar to those that had brought him inside in the first place.

Stress was central in my thoughts. While I knew that Michael was simply trying to help‚Äîand to put what he‚Äôd been learning in vet school to use‚ÄîI didn‚Äôt believe Fat Boy was sick. We had no mycoplasma on our farm, nor had we had any signs of infectious laryngotracheitis. My hunch? Fat Boy simply suffered from prolonged exposure to the extreme weather conditions and the stress that this exposure caused him. Still, I decided to be cautious, just in case.

This plan went out the window the next morning when I discovered Jaeson by the Christmas tree. Was he eagerly awaiting the rest of the family to open presents? Nope. He had moved Fat Boy‚Äôs box into the living room and was having an animated conversation with the rooster about the Christmas cookies he planned to eat. Jaeson happily reported that Fat Boy had drunk a lot of water, eaten and pooped. (Jaeson, meanwhile, had refreshed the bird‚Äôs carton to keep it from ruining ‚Äúthe joys of Christmas‚Äù with its distinctive barnyard fragrance.)

Fat Boy‚Äôs condition improved throughout the day, to the point that he was crowing loudly by dinnertime. His breathing was still wheezy, albeit not as loud as the previous day. Michael kept an uneasy eye on the rooster. Jaeson reported that none of the other birds displayed any symptoms, which made me feel more certain in my diagnosis. Because I have only my poultry-keeping experience to draw upon vs. years of pre-vet and vet training, I decided to consult the pros.

The next day, I pulled out the U.S. Department of Agriculture pamphlet, Backyard Biosecurity Practices to Keep Your Birds Healthy. In it is the number for a hotline staffed by USDA vets who (at no charge) help callers determine animal illnesses and conduct disease investigations.

A vet eventually left a voice message referring me to Dr. Mick Fulton, one of the Midwest‚Äôs leading poultry scientists, an expert in infectious poultry diseases and my go-to source for chicken-related questions. After a chuckle over being referred to the very person I would have contacted, I emailed Fulton. Moments later, a USDA vet named Nancy called to make sure I‚Äôd received the voicemail and to ask more about Fat Boy. I was impressed with the scope of her questioning. Her conclusion? Fat Boy was suffering from exposure and stress. I was to keep an eye on his symptoms over the next few days and to contact Fulton should Fat Boy‚Äôs condition deteriorate.

About an hour later, Fulton replied, echoing Nancy‚Äôs diagnosis and advice but adding that Michael was right to suspect mycoplasma and infectious laryngotracheitis, given Fat Boy‚Äôs symptoms. I shared Fulton‚Äôs praise with my aspiring vet student, then informed Jaeson of what we‚Äôd need to watch for with Fat Boy for the rest of the week. Our unexpected holiday guest will be staying inside for a little while longer, quite possibly until New Year’s Eve. Should anything happen, I now have another medical source I can trust.

How to Build & Use Your Own Plant Press