Should You Get a Rooster? Here Are Pros & Cons

Are you considering whether to add a rooster to your flock of hens? Weighing these factors will help you make the decision that's right for you. 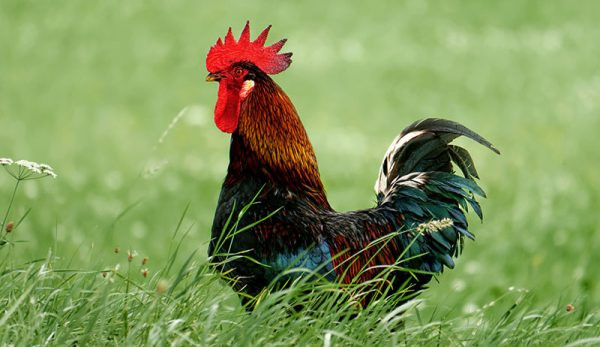 “Should I get a rooster?” My friend Dana recently asked me. She and her husband, Josh, live on the other side of our township, with few human neighbors but plenty of predators. They have kept a dozen or so hens for four years, but the number has varied because of the predators. It breaks Dana’s heart every time she discovers one of her girls dead or missing, and this year has seen more fatalities than usual. Diana hoped that the presence of a rooster might help deter attacks.

We advocate rooster rearing, but just because it’s right for us does not mean it’s right for everyone. These pros and cons can help you decide whether your flock can benefit from adding a boy.

Roosters are an essential component of a flock protection plan. If you free range, they might be your only source of security. A rooster’s keen eyesight can discern movement typically missed by foraging or sunbathing hens. That sharp vision also readily detects aerial predators. A cry of alarm from your boy will send your flock scurrying to safety and, if more escape time is needed, a rooster will turn and defend his girls with his sharp talons, spurs and beak.

Roosters aren’t just protectors. They’re also heads of their household, guiding their flock and teaching important practices. A rooster leads his hens around the yard, calling to them when he finds a particular tasty tidbit for them to eat. He troops them over to the sunniest place to dust bathe, stand guard while the ladies take their leisure, then get them moving again when he decides they’ve had enough. A rooster finds his hens shade on hot days and shelter when it rains. He even climbs into the nest box to show the girls the best place to lay their eggs. As dusk falls, he calls them back to the coop, often waiting for everyone to get inside and settled before he comes in for the night.

If you’ve ever wanted to raise your own chicks, a rooster is a step in the right direction. Hens require a rooster to fertilize their eggs, and a rooster happily obliges in this endeavor. If producing chicks is your goal, you need one rooster for every 10 to 12 hens.

Like almost every bird in nature, the male chicken is far more colorful than his female counterpart. While hens’ feathers tend to be subdued in hue and in pattern, roosters verge on the flamboyant with their brilliant coloration and showy tail feathers. Roosters are barnyard eye candy. As pretty as a hen might be, nothing quite surpasses a boy in full display.

There is a problem with roosters being the last line of defense against a predator: Sometimes he sacrifices himself to save his girls. Our friend Charles, whose homestead was deep within wooded acreage, lost a rooster almost every month. It reached the point that I couldn’t bear to sell any more boys to Charles because I was sending them to their death. Your rooster ownership might be quite short lived, depending on where you reside.

There’s no other way to say this: Some roosters are just flat-out jerks. Breed has nothing to do with this; it’s a matter of individual personality. When he was younger, our Thomas Orpington would dash straight across the yard, sexually assault a hen in another flock, then scamper back to the safety of his own flock. (He has, fortunately, outgrown this reprehensible habit.) It’s really the luck of the draw (or the hatch). You might have a wonderful rooster who is gentle with his girls and treats them like queens. You might end up with hyperaggressive lout who strips his hens’ backs of all their feathers from his forceful attentions.

The flip side? Your rooster might be so maniacally possessive and protective of his hens that he doesn’t let you come near them, not to collect eggs, not to fill their waterer or feed, nothing. Our son’s Davey Orpington one day demonstrated his flock-protecting abilities by spearing me in the calf with his spur. Oh, he ran away fast once he recognized me and never stepped out of line again. If you have small children, however, the chance of ending up with an aggressive rooster is something to definitely bear in mind.

You might not want to raise chicks. You might not have a separate brooder for Mama Hen to set and raise the babes, or you might not have the ability to invest in chick-specific equipment and fencing. You might not be able to help yourself once you see little peeping fluffballs, meaning your flock will swell in size thanks to all the cute little chicks your rooster helped create. Even if you faithfully collect eggs several times a day, hens sometimes make secret nests, and the next thing you know, here she comes across the lawn with a dozen fluffballs romping beside her. Another drawback? Some of your shell-egg customers might be reluctant or downright squeamish about buying eggs that are fertilized. You might patiently explain that no, the egg doesn’t become a chick and that no, they won’t find a surprise upon cracking an egg, and no, the taste of the egg won’t change. Still, some folks just won’t hear of it. A rooster in your flock means there’s a chick in every egg, to this way of thinking.

Those of us who have roosters know firsthand that crowing extends well beyond daybreak. Roosters crow all day long. They crow to warn away predators. They crow to communicate with other roosters acres away. They crow after they mate. They crow to express joy at a warm beam of sunlight. They crow for many reasons. This might come as a surprise to microflock owners who’ve never owned a roosterâ€”and to neighbors who know you raise chickens but weren’t aware that a rooster was joining you. Our former neighbors moved in next door, fully aware we own a poultry farm, then petitioned our township to have us get rid of our roosters because they were “noisy 24 hours a day.” (Their petition failed and they moved away.) Roosters do indeed make a lot of noise. It’s up to you to view it as discordant clamor or as a beautiful rural song.

Should you decide to add a rooster to your flock, there is one important step to take before bringing your boy home: Check with your city or township hall. Most municipalities have detailed guidelines regarding livestock ownership, including whether you can own roosters (and how many, if so) in your residential zone. The last thing you want to do is violate a township ordinanceâ€”and possibly face a stiff penaltyâ€”simply because you wanted to keep your hens safe.

Because of their lot size, Dana and Joshua are allowed to own an unlimited number of poultry, roosters included. After a lot of deliberation, they decided that roosters weren’t right for them. Their flock of girls is now protected by a couple of peacocks, which is a completely different pro-and-con poultry list to consider.