A Coup in the Coop: How to Handle Rooster Overthrow

If you have more than one rooster in your flock, sometimes the leadership changes and it gets ugly. Here's how to ease transition after rooster overthrow. 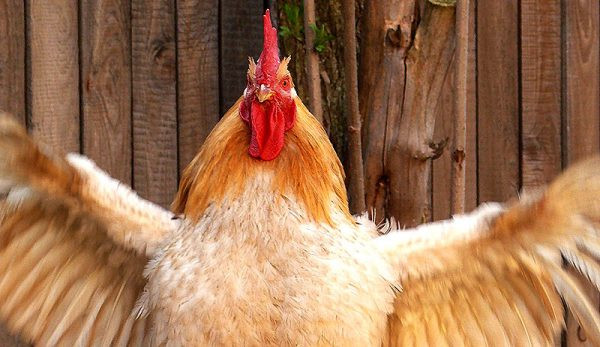 Claude Orpington was the most doting father ever. Little Ginger Bean had been isolated from the New Orpington flock with his mom, Fitz, until he was fully feathered.

From the moment the hen and young cockerel joined the others, Claude was Super Dad. He took Ginger Bean under his wing.

He taught him how to forage, showed him the feeder and waterer and taught him to dust-bathe. Claude even showed Ginger Bean how to hop up the deck stairs and peck at the kitchen door for handouts.

When Ginger Bean became an adult, here’s how he repaid his father: rooster overthrow.

It broke my heart to them fight during the If you have more than one rooster in your flock, sometimes the leadership changes and it gets ugly. Here’s how to ease transition after rooster overthrow. Claude won each time … until he didn’t. (See some of the evidence above.)

Once he lost, Ginger Bean became unbearably cocky. He plucked out his father’s beautiful tail feathers and chased him out of the coop and run every morning. He even ran up the deck to steal the slices of bread we’d give to poor Claude.

We commiserated with Claude, who, after the rooster overthrow, slowly accumulated a following of hens who couldn’t tolerate the new alpha male. Ginger Bean did everything he could to regain these females. Finally, though, he came to his senses and left three hensâ€”Butters, Selene and Stormyâ€”with his father.

I won’t even go into the ducks. That flock is pretty much a stag party. With Davey’s passing in the spring, we’d hoped Ginger Bean would smoothly step into the role of No. 2, especially with all the guidance Claude provided.

Fellow flock owners who heard about the situation expressed amazement that we managed to keep the peace in any flock with two or more roosters.

I describe it as the “heir and spare” philosophy. I didn’t want to leave any flock unguarded should the rooster die.

Furthermore, all the roosters communicate with each other, regardless of their flock. I enjoy hearing their calls throughout the day as they check in with each other and share whatever news roosters share.

I was horrified to hear fellow chicken-keepers’ tales of tormented deposed roosters, several of whom were gravely injured by their successors. Learning about the experiences and taking into account Claude’s own, here are three tips for dealing with a rooster overthrow.

If your alpha male is now a betaâ€”or an omegaâ€”it’s best to remove him from the flock. His continued presence will only aggravate the new head rooster and might motivate him to continually attack just to demonstrate his superiority.

Set the old boy up in a separate coop, preferably at some distance from his former home. Carefully select at least two hens from the flock, preferably ones you’ve observed to have a close connection with the deposed leader, and move them to the new coop.

This way, your older rooster remains social, has company and does not sink into a depression from being ousted, isolated and lonely.

2. Check for and Treat Injuries

The signs of battle between boy birds tend to be very obvious. Common ones include:

While you can’t replace missing tail feathers, it’s important to thoroughly clean the other wounds to prevent infection. Chicken runs and coops are bacterial hot beds. An exposed wound or two is an invitation to sepsis.

Wrap your rooster in a warm towel to soothe him and keep him under control before you begin to render first aid.

Once you’ve cleaned the injuries, use a sealant and anti-fungicide such as Blu-Kote to further protect your boy from infection. Take the time to thoroughly inspect your bird, as he might have suffered internal injuries if the battle was particularly ferocious.

It’s relatively common for a new alpha, fresh from usurping the title from his predecessor, to act aggressively toward the rest of the flock. He is the leader now, and he wants everyone to know it.

While some transitions are a little bumpy, some are downright roller-coaster rides, with all the drama of a daytime soap opera.

I strongly recommend you watch your flock carefully for the first few weeks as it adjusts to the new management. If your girls hide in their nest boxes, if they stop laying or if they bear the signs of rooster abuse, you might need to consider whether the change in leadership is in the flock’s best interest.

If the negative reactions continue past a few weeks, you might need to stage a coup of your own.

As for Claude, his little flock has grown. He now has Dolly, Laetitia and Harriet from the Ameraucana flock following him around the yard. With no male in the Ameraucana coop and half the females happily following the ousted Orpington, we have to decide whether to house Claude and his harem with the Ameraucana girls until we can get a new Ameraucana rooster.