Rooster Spurs: 3 Methods For Removing Them

Rooster spurs are self-defense tools for birds, but they can become dangerous to hens or to roosters themselves. Here's how to reduce their size. 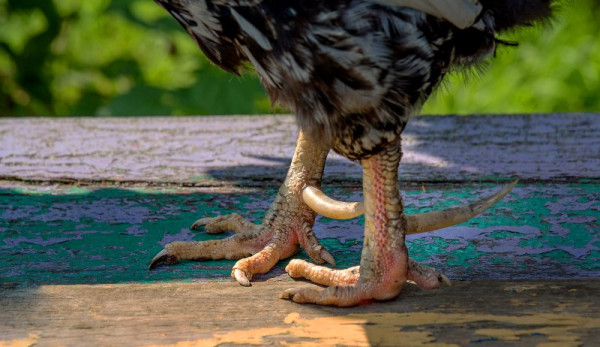 Something about a crisp fall day makes one notice the little things about a flock. I had paused in my morning chores to watch Thomas Orpington strut around his run when my gaze fell upon his shanks and the enormous pair of rooster spurs that protruded prominently. Curious, I took stock of my other boys. Sure enough, all of my Orp roos were sporting leg daggers.

Rooster spurs serve a key purpose in a flock: They are the male birds’ natural weapon, used to defend themselves and their hens against predators as well as any threat to their territory. Spurs consist of two parts: The underlying bone, which projects from the metatarsus, and the hard outer sheath, composed of keratin, the same substance that forms rhinoceros horns. As a rooster matures, this keratinous layer grows, creating the spurâ€™s characteristic point. Left untrimmed, rooster spurs can reach lengths that could become harmful to hens and, should a rooster have aggressive tendencies, to its owners. Spurs can also curl back on themselves, causing damage to a roosterâ€™s own legs.

Many flock keepers trim rooster spurs to prevent unintentional injury. Permanent spur removal is possible but, as bone is involved, surgery is involved and it can be costly. Fortunately, there are three ways to remove spurs at home yourself.

Like horse hooves and human fingernails, the outer sheath of rooster spurs consists of keratin. Using a metal file, a hoof rasp or a Dremel tool outfitted with a sanding attachment, you can grind the spur down to a more manageable length. Immobilize your rooster by securely wrapping it in a blanket or towel, leaving one leg exposed. Taking firm hold of the shank, use your chosen tool to file down and shape the spur. Make sure to stop well before reaching the bone to avoid causing pain and injury to your bird. You might need someone to help keep your bird secured or distracted while you file down the spur.

Just like pet claws, rooster spurs can be trimmed via clipping. Be sure to select a set of clippers large enough to fit around the spur; the sharper the clippers, the more quickly the procedure will go. Immobilize your rooster as described above. With one hand firmly holding the shank steady, clip the top of the spur away. Make certain you do not clip all the way down, as you will cut into bone. A metal file can then be used to round and smooth down the clipped edges of the spurs.

Detaching the outer sheath of a rooster spur involves less risk than filing or clipping, as no sharp tools are involved. Instead, use pliers and two medium-sized potatoes. Heat a potato in your microwave until it’s fully cooked (approximately 10 minutes). Carefully insert a spur into the potato, making sure that it does not touch the roosterâ€™s shank, as this can cause a painful burn. Leave the potato on for two to three minutes. The heat and moisture from the potato act to soften the keratinous sheath that overlays the bone. Remove the potato, then immediately grasp the spur with the pliers, give it a good twist, and pull. The sheath should pop right off. If not, apply the potato for two more minutes and try again. Repeat this on the other spur with the second potato.

After inspecting each of my boys, I concluded that only Davey Orpingtonâ€™s spurs were of a size that required my attention. Because our region is home to numerous predatorsâ€”animals that will become increasingly hungry as winter approachesâ€”I prefer to leave my roosters armed and capable of defending their flocks. Davey’s spurs, however, had started to curl back on themselves. Just a few minutes with two Yukon Golds did the trick, and Davey got to enjoy a chopped potato snack afterwards for his troubles.