Photo courtesy of Heavenly Horse Haven Rootie now weighs more than 1,000 pounds. The first time I saw Rootie since he was a piglet, he already weighed more than 1,000 pounds. A permanent resident at Heavenly Horse Haven (http://site.heavenlyhorsehaven.org/index.html), a farm-animal rescue in Anza, Calif., Rootie was the kind of pig bred for the table. […] 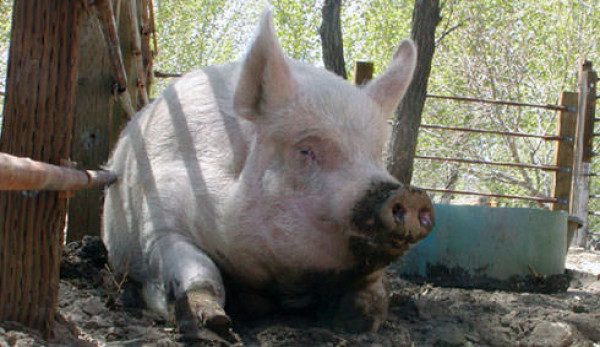 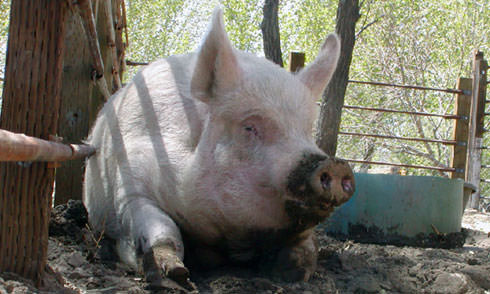 The first time I saw Rootie since he was a piglet, he already weighed more than 1,000 pounds. A permanent resident at Heavenly Horse Haven (http://site.heavenlyhorsehaven.org/index.html), a farm-animal rescue in Anza, Calif., Rootie was the kind of pig bred for the table.

It had been two years since I made the 90-minute drive to Anza to visit the horse rescue. Run by an incredibly devoted animal lover, Gina Perrin, Heavenly Horse Haven focused mostly on horses but had become a haven for every other farm animal you could imagine. When I visited the horse rescue yesterday, I saw emus and marmosets, along with the usual horses, goats, llamas, ducks, chickens and, of course, Rootie.

Rootie came to Heavenly Horse Haven several years ago. He was found as a small piglet on a street corner in Los Angeles by animal control and brought to a local rescue. When he grew to 1,000 pounds, he became too large for the small rescue to keep, so he was taken to the horse rescueâ€™s sprawling property out in the desert.

I couldnâ€™t believe how huge Rootie had become; he was absolutely massive. I called his name as I approached and, lying in the mud in his large paddock, Rootie greeted me with a grunt. I squatted down by his head and scratched behind his massive ears and stroked his muzzle.

After a while, Rootie got up â€” lifting his massive bulk out of the mud was no easy task. As he started to walk toward his water trough, I couldnâ€™t help but notice how much effort each step took. His legs seemed like thin pegs under his giant body. It was obvious this pig was not designed to walk.

Later on, I asked Gina about Rootieâ€™s difficulty with walking. She confirmed my suspicions. Pigs like Rootie that were meant for food were never intended to live this long. Bred to die at a young age, their â€śdesignersâ€ť didnâ€™t take into account what these animals would be like when they matured. Rootie cheated the butcherâ€™s knife, but he now had to struggle just to move around.

Itâ€™s clear that Rootie is happy and well-loved, and Iâ€™m sure if he could choose, heâ€™d prefer to be here rather than have been made into bacon and pork chops many years ago. Yet, I couldnâ€™t help but feel outraged that factory-farm livestock have been overbred to the point to where they canâ€™t even function as normal animals if they live past their scheduled slaughter date.

Organizations such as the American Livestock Breeds Conservancy (www.albc-usa.org) are working hard to bring back heritage breeds â€” farm animals kept by American family farmers in the centuries before the days of agribusiness. Urban farmers should embrace these breeds and help bring them back into the public eye. In my opinion, farm animals should be treated with dignity, and that includes being able to walk comfortably into old age if they are fortunate enough to get that far.