An earwig lookalike, this garden good bug may have slithered through your garden unnoticed. 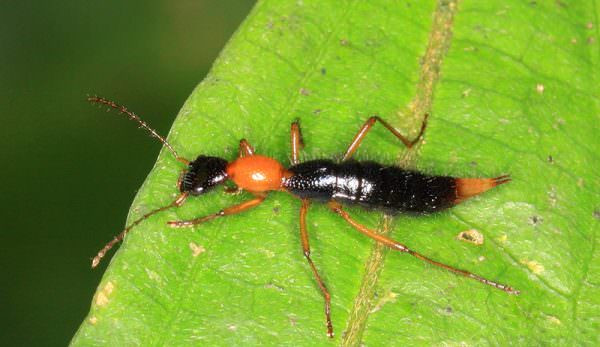 The rove beetle is an important beneficial insect relatively unknown by many gardeners. Itâ€™s one of the most prolific types of beetles in the world, with tens of thousands of different species found in various environmental niches on all continents except for Antarctica. If rove beetles are so common, why do few people seem to know about them?

One reason rove beetles may go unnoticed is that many people confuse them with earwigs. This is an easy mistake to make as the rove beetle tends to share the earwigâ€™s slender, long, low body type. It also pair of slight protrusions at the end the abdomen that could be confused with the earwigâ€™s characteristic rear forceps or â€śpinchers.â€ť The next time you think you see an earwig, take a closer lookâ€”you may be locking eyes with a beneficial rove beetle!

Because there are thousands of rove beetle species found in North America alone, itâ€™s difficult to offer a general description that encompasses the vast variation across species. Rove beetles, especially in our part of the world, tend to be quite small, with most species falling between 1/3 to 3/4 inch long. Coloration varies, but most are composed of dark brown or black hues. The head of the rove beetle is flattened with a strong mandible and very short antennae, and the abdomen is segmented and exposed due to a pair of short flexible elytra (wing covers) found only on the upper body. This body shape allows these beetles to move in slithering, snake-like manner through varied damp soil terrains.

Most rove beetle species in North America are either predators or scavengers. While both types of play vital roles in our environment, the predatory rove beetles are especially of interest to gardeners. Both larval and adult forms are active feeders that seek out a range of pest insects around the garden, including aphids, various mites, fly larva, grubs and small caterpillars. Being nocturnal, they do their feeding at nightâ€”another reason why you likely donâ€™t see them often.