Runner Ducks Don’t Typically Fly—But This One Does

This duck couldn't be more thrilled about his first flight. 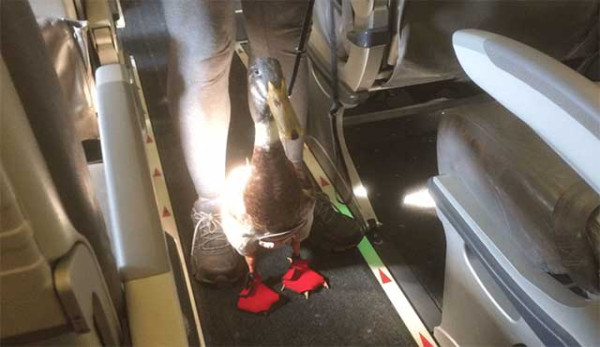 I’m a big fan of runner ducks, and this story in particular has endeared me—along with the rest of the internet—to them forever.

It’s the story of an Indian Runner duck named Daniel Turducken Stinkerbutt—or “Daniel” for short. Daniel is an emotional support animal who stays by the side of his keeper, Carla Fitzgerald. He’s there to help her through the PTSD she suffered after getting thrown from a horse-and-carriage and going through months of physical rehabilitation, according to a Washington Post article. He cuddles her when she needs comforting and cues her to calm down by trying to climb up her legs when he senses she’s restless. Daniel wasn’t trained to do these things—he just jumped in when he saw a need—and now he’s an official member of the human flock.

Recently, Daniel accompanied Fitzgerald on his first airplane flight, and animal-lover Mark Essig, the author of Lesser Beasts: A Snout-to-Tail History of the Humble Pig, happened to be sitting across the aisle. He captured the entire experience on Twitter.

My seatmate, CLT➡️AVL, is this handsome duck named Daniel. His gentle quacking eases the sadness of leaving #SFA16. pic.twitter.com/iDKWCceAFi

Daniel hopped aboard the plane in his usual uniform—red shoes and a Captain America diaper—and was freshly showered, so he smelled pleasant. He couldn’t contain his excitement about the ride above the clouds, tail wagging, probably because he’s never gained liftoff before. (Runner ducks don’t fly, you know.)

Here is a 3-second video of Daniel the emotional support duck. His human says, ‘and wagging? That’s happy.’ pic.twitter.com/WElW9d827o

When the plane landed, Daniel and Fitzgerald posed with the crew as they presented the duck with a Certificate of First Flight.

Daniel, the duck on my flight, likes to look at the clouds. pic.twitter.com/YiOjCvZ0NO