Runners are by far the best duck egg producers; they make great pets and even show birds. 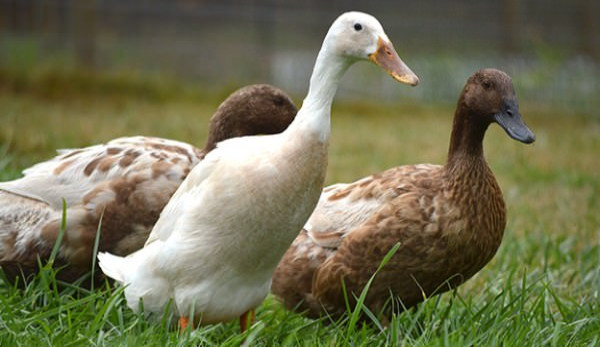 Use: The Runner ranks as one of the best egg producers in the duck world, pumping out up to 300 white eggs per year (however, donâ€™t ask them to set!). Active and quick, these ducks excel at foraging on pasture, devouring pesky slugs and snails, weeds, tender grass and other food items. They also make entertaining pets and cool exhibition birds. Due to their powerful flocking instincts, Runners can stand-in for sheep so herding dogs can practice their moves.

History: Runner ducks, also known as Indian Runners, originated centuries ago in Asia, where they provided farmers with an abundance of fresh eggs. In parts of Asia, farmers traditionally herded these speedy ducks to and from the rice paddies, allowing them to spend the day dining on pests and weeds, fertilizing the crop as they went. After their introduction to Britain during the 1830s, Runners became the rage because of their unusual look and impressive egg output. Although still a favorite today, the American Livestock Breeds Conservancy lists Runners in their â€śWatchâ€ť category, with less than 5,000 breeding birds in the United States.

Conformation: The comical-looking Runner has a skinny body, long neck, and amazingly upright stance that make it resemble a long-necked penguin. The slim head has a slightly convex bill and high-set eyes. Classified as lightweights, these ducks weigh around 4 pounds and live up to their name as runners. They flaunt a fantastic variety of colors and patterns, including Black, White, Buff, Chocolate and Gray.

Special Considerations/Notes: If youâ€™re looking for a mellow, slow duck, a Runner would not be your best choice: these ducks have loads of energy. Be sure to pick â€“ and breed for â€“ Runners with strong legs.