Run Your Tractor at Full Throttle? Ask the Tortoise

For some tasks, such as heavy mowing or plowing, full throttle is necessary, but for many others, less throttle saves fuel and also creates less noise. 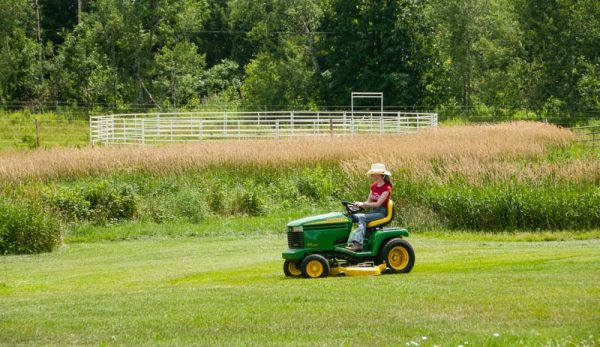 Remember the story of the tortoise and the hare? The speedy hare knew he couldn’t lose a race against the slow, plodding tortoise, but an ill-timed nap left him too far behind to overtake the slow (but steady) tortoise, who scored the victory.

Itâ€™s easy to recall this fable when using a typical riding lawn mower, as throttle controls are often marked with illustrations of a turtle (for low throttle) and a rabbit (for full throttle). On many occasions, you need to run your tractor at full throttleâ€”you certainly wouldnâ€™t want to go mow thick grass on the turtle setting. The same principle extends to full-size utility tractors as well; tasks such as plowing fields and baling hay might require as much power as the engine can generate.

But can you learn a lesson from the slow and steady tortoise? Perhaps. You might not win a race by pulling back on the throttle, but you can score a significant victory of a different kind by saving gas.

Running an engine at full throttle comes with a price: increased gas consumption. Even a simple lawn mower, running at full throttle, can quickly guzzle through a full tank of gas. Run your engine at low throttle, and the savings can be significant.

My brother recalls a story that illustrates this perfectly. Years ago, he had a riding mower with a manual transmission that boasted seven speeds. When set to the fastest gear at full throttle, the mower was ridiculously fastâ€”much faster than my brother would ever want to drive. But instead of choosing a lower gear to obtain a more reasonable speed, he sometimes left the mower in its highest gear while pulling back on the throttle to slow it down.

This strategy had a couple of interesting effects. Thanks to the high gear setting and low throttle, the mower couldnâ€™t offer much in the way of strengthâ€”you wouldnâ€™t want to mow with that combination. But because my brotherâ€™s primary concern was driving a small cart of supplies around the farm on a daily basis, the lack of strength was unimportant and more than offset by the phenomenal gas savings. Under this setup, the mower would run for weeks or even months without needing to be refueled. Like the tortoise, it just plugged along steadily without fanfare, completing its chores efficiently and effectively.

Another advantage: Tractor engines are much quieter when allowed to run at less than full throttle, giving your ears a bit of a rest. And when it comes to utility tractors, they have power to spare for simple projects, so you can handle tasks such as pulling a wagon of hay while running your tractor at a lower throttle setting. Whatâ€™s better than saving gas and reducing noise at the same time?

As mentioned earlier, there are plenty of times when you absolutely need the full power of your tractorâ€™s engine. But if you run it at full throttle all or most of the time, perhaps you should take heed of the tortoise and pull back when possible. Your wallet and ears will thank you.