Rutabagas: A Humble Vegetable Worth Raving About

Humble as can be, rutabagas aren't glamorous, but they sure are tasty. Learn how to grow, harvest and prepare this delicious root. 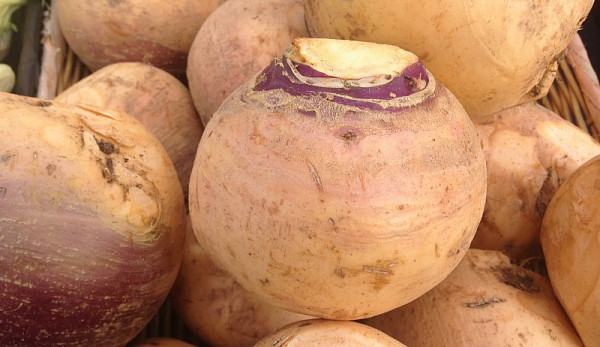 Rutabagas. Not a sexy name and certainly not a sexy vegetable. They’re boring, knobby, brown orbs that are about as unassuming as you can get. But, on the inside, well, that’s a different story. As it turns out, these roots are surprisingly divine and totally worth growing.

Rutabagas are a member of the Brassica family (Brassica napus var napobrassica). The plants are large and leafy, and they require a long growing season to form a substantially sized root. While the greens are sometimes used as a livestock feed, they’re also edible for humans. However, rutabagas are primarily grown for their starchy root that has a texture similar to a turnip or parsnip.

Also known as a swede, rutabagas have been grown as a food crop for several hundred years. Originally bred in Russia and northern Scandinavia, these roots weren’t grown in North America until the early 1800s.

An excellent storage crop, rutabagas will last for months in a cool basement or root cellar. An alternate storage method involves leaving the roots in the garden, as described in a later section of this article.

How To Grow Rutabagas

Thankfully, rutabagas are very easy to grow, but again, they do require a fairly long season of 90 to 100 days to produce an ample root. The best rutabaga varieties have roots with a sweet flavor and smooth, buttery texture. Many have a purple tinge to the top of the root, with a pale yellow color inside.

Rutabaga seeds should be sown directly into the garden in spring, anytime after the danger of frost has passed. The soil must be over 40 degrees F for the seeds to germinate. Sow the seeds in rows spaced 8-12 inches apart. Thin the resulting seedlings to a spacing of six to eight inches apart on center. Rutabaga roots can grow quite large so give the plants plenty of room to grow.

Throughout the season, make sure the plants receive ample moisture, watering when necessary during times of drought. Lack of moisture can lead to woody, pithy roots. Side-dress with an organic, granular fertilizer in mid-summer to boost root size and plant health.

Frosts sweeten the flavor of rutabagas, because it converts their starches into sugars. For the most pleasing flavor, be sure to leave the roots in the ground until they’ve been frosted at least two or three times. A thick layer of shredded leaves placed over the plants will insulate them from all but the coldest weather, prolonging the harvest and protecting your crop. Except for locations in the extreme north, it’s possible to completely overwinter rutabagas in the garden with nothing more than this layer of mulch.

How To Prepare Rutabagas

To harvest rutabagas, simply pull the roots from the ground when you’re ready to cook or store them. Cut off the leafy tops immediately after harvest, leaving an inch-long stump of stems behind, and do not cut into the root itself.

Preparation can be as simple or as complex as you’d like. Peel the harvested roots with a pairing knife and slice them carefully as the flesh can be quite hard.

My favorite way to use homegrown rutabagas is as a mash. Mix the boiled roots with buttermilk and butter and mash as you would potatoes. You can also turn them into a creamy soup using the same recipe you use for winter squash soup, except substituting the rutabagas for the squash.

Rutabagas are also excellent when mashed with carrots or parsnips, and a cooked rutabaga puree can serve to thicken soups and gravies as well.

Give this humble vegetable a try. You’ll extend your homegrown harvest and expand your culinary options.