Saanen (pronounced SAH-nen or SAW-nen) goats originated in the Saanen Valley of the canton of Bern in Switzerland, where they were selected for milking ability, hardiness, and color. Saanen average 1,975 to 2,000 pounds of 3 percent to 4 percent butterfat. 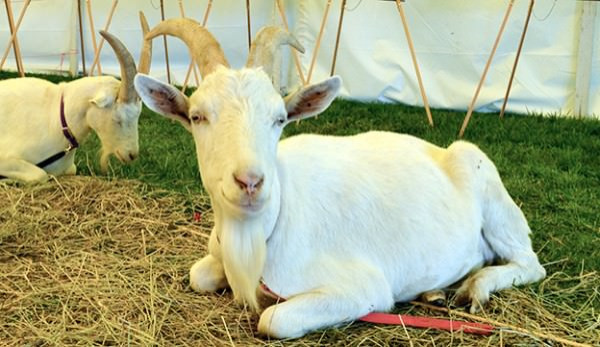 Use: Saanens are the Holsteins of the goat world. Saanen average 1,975 to 2,000 pounds of 3 percent to 4 percent butterfat milk per year. However, the American Dairy Goat Association’s top milk producer for 2007 was Caprikorn Krug’s Stargate, a Saanen doe who gave 5,140 pounds of milk! Tall, big-boned, strong and gentle Saanen wethers make superlative harness- and packgoats. When properly conditioned, Saanen wethers are capable of packing up to 60 pounds over steep, rocky terrain.

History: Saanen (pronounced SAH-nen or SAW-nen) goats originated in the Saanen Valley of the canton of Bern in Switzerland, where they were selected for milking ability, hardiness, and color. In 1893 several thousand head of Saanens were taken from the valley and dispersed throughout Europe; they came to the United States in 1904 and became the first breed registered in North America.

Conformation: Saanens are large dairy goats. Mature bucks stand 34 to 36 inches tall or better and weigh over 200 pounds; does measure 30 to 35 inches and tip the scale at 150 pounds or more. Saanens are white or creamy white with tan- to olive-hued skin; spots on the skin are acceptable, small spots of color on the hair are undesirable but allowed. However, due to a recessive gene in the breed, colored goats called Sables are sometimes born to Saanen parents; though Sables are technically a variety of Saanen and they share the same characteristics except for color, they’re considered a separate breed (for more information visit the International Sable Breeders Association website). Saanens have strong legs; slender, straight or slightly dished faces; erect ears that point forward; short, fine hair; and many Saanen goats have beards. Calm, affectionate, and supremely lovable, these are very nice goats to have around.

Special Considerations/Notes: Saanens have only one failing: they don’t do well in hot, sunny parts of the world. Their light-colored skin predisposes Saanens to skin cancer, so in Southern climates Sables are a much better bet.