Safely Coexist With Bats In The Attic, Barn & Beyond

By taking action at the right time, we can minimize potential problems and help to support the beleaguered bats that we share an environment with. 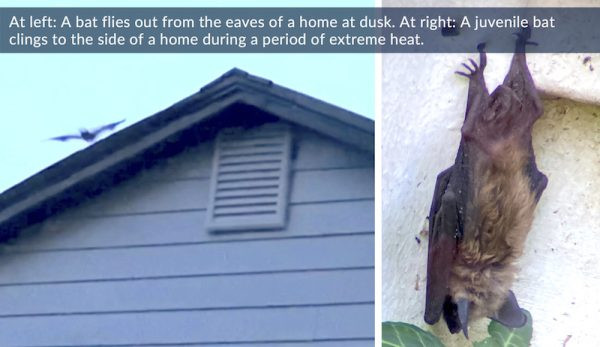 It looked like a dead leaf hanging off of the side of the bottom corner of my house. But on closer inspection, I noticed that â€śleafâ€ť had tiny claws, leathery wings and downy-looking fur. I made sure all the people and pets in my house gave the juvenile bat a wide berth.

By the next morning, it had moved on.

For a few years, I’ve tolerated a small number of bats living just under the siding of my house. After all, they’ve been running out of natural habitat. What’s more, we’ve lost more than 90 percent of certain bat populationsÂ to white-nose syndrome.

While I’ve rarely seen or heard â€śmyâ€ť bats, I’ve certainly benefitted from having them around. â€śThey’re going to be removing insect pests from your environment,â€ť says Brad Westrich, a mammalogist with the Indiana Department of Natural Resources Division of Fish & Wildlife. â€śThose may be mosquitoes that could transmit various pathogens to you or your livestock or pests in your garden or in your local forest.â€ť

In fact, some estimate that bats save farmers nearly $4 billion in pest control services annually.

When it comes to finding suitable roosting spots, the big brown bat, the evening bat and the little brown bat aren’t as choosy as some of the other bat species. â€śThey’re going to be more flexible and all right with utilizing one of those human structures,â€ť Westrich says.

He continues, â€śIf maintenance on the outside of a structure hasn’t been kept up, bats are going to utilize those openings … and have that nice place to roost.â€ť Bats easily can exploit small openings created by mice or other animals. They’ll also take advantage of breaches in siding, gables and soffits from natural wear-and-tear.

Read more: Keep uninvited guests out of your barn with these tips.

It’s one thing to harbor a few bats under the siding on the outside of your house, but what if they’re inside your attic?

â€śWhile they’re in the attic roosting, they’ll flip over from their hanging position, so that they can urinate and defecate,â€ť Westrich says. â€śObviously, that accumulation of moisture wouldn’t be good for insulation in the longterm.â€ť

Bat guano may be good for the garden, but allowing it to build up indoors is a non-starter. â€śYou can either hire a professional to remove those things or very cautiouslyâ€”wearing a respirator and sealing gogglesâ€”you can remove [the guano] yourself,â€ť he says.

(Donning personal protective equipment for these cleanup operations is essential, since the dust and debris you encounter may contain harmful pathogens.)

Bats can pose further risk to people and pets because they are a potential vector for rabies. â€śIf you have pets, make sure they’re current on their rabies vaccinations,â€ť Westrich says. â€śShould they have an encounter with a bat inside the structure or outsideâ€”if the bat’s clinging to the side of your house or barnâ€”then you know that that pet is as safe as it can be.â€ť

If there are children in your household, tell them never to touch a bat they encounter. â€śThey shouldn’t try to pick it up,â€ť he says. â€śYou want to avoid those incidences when a bite could happen and then you have to deal with the hospital and worrying about getting post-exposure [rabies] prophylaxis.â€ť

Let’s say you find a bat in your living space and you suspect you or someone else may have had contact with the animal. â€śIn those cases, you need to go to all lengths possible to safely capture that bat and get it to your local county or state health department,â€ť Westrich says. â€śIf you can capture the bat and get it submitted [for rabies testing], you could get those results back quickly to prevent yourself from having to go through the post-exposure prophylaxis.

“If you don’t have the bat, then more than likely doctors are going to err on the side of caution and urge you to get it.â€ť

In North America, bats emerge from hibernation and begin looking for roosting structures in the spring. â€śIf you can catch it between April and early June, you have the possibility of excluding the bats,â€ť Westrich explains. To keep them out, you can buy one-way bat exclusion devices or make your own.

If, like me, you have a sizable bat colony and you’re already well into summer, you’ll want to wait until fall to remediate. In October, bats typically head to area caves to hibernate. Once they’ve gone, you can remove any guano, make necessary repairs and install bat excluders to keep them out next season.

Depending on the species, bats can live from five to 30 years, and, Westrich notes, â€śThey’re going to return to some of those habitat areas for various portions of their life cycles.â€ť