Safely Take Down A Barbed-Wire Fence

A barbed-wire fence can pose a threat to your livestock—remove them from your property with these no-nonsense safety tips. 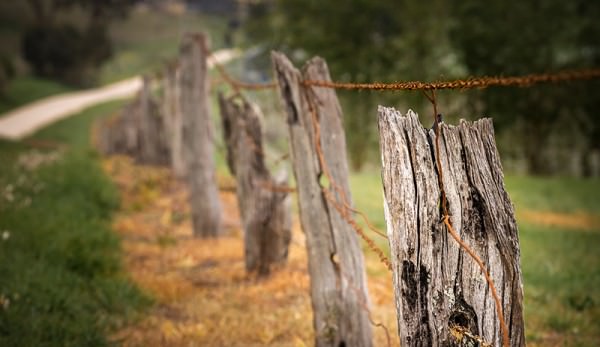 In years’ past, many farms and pastures were fenced using barbed wire: long strands of metal wire with sharp barbs to prevent livestock from passing through. A barbed-wire fence was quick and easy to install and served their purpose well, but it was also dangerous and capable of causing severe injury.

As a result, barbed-wire fences have fallen out of popularity and have been replaced by safer alternatives, but many of the old fences are still with us today. If you live on an old farm, there’s a good chance that there are barbed-wire fences surrounding the perimeter of the property or guarding the edges of fields. Because they pose a safety hazard, it’s a good idea to dismantle and remove them from your farm, though doing so requires a great deal of caution to ensure that you don’t get hurt. Here are some tips to help you stay safe while taking down barbed-wire fencing.

2. Use The Right Tools

The safest way to remove barbed-wire fencing is to cut the wires into short, manageable pieces that can be easily carried away; this is a much better approach than trying to simply remove the wire from the posts, which results in long strands of wire that are nearly impossible to safely maneuver.

The tool of choice for cutting the wires is, not surprisingly, a pair of sturdy wire cutters that can easily slice through the wire without much effort on your part. You’ll also want to have a large container on hand—perhaps a small trailer attached to your tractor or ATV—so that you can immediately place the pieces of wire in the container and not on the ground, where they could potentially be overlooked and stepped on by humans or livestock.

Taking down barbed-wire fences isn’t a one-person job—having a helper will make things safer and much simpler. Barbed wire is very springy and can move in unpredictable ways, so when cutting the wires, you’ll want to have your companion hold the wire on either side of the cutting point to prevent the wires from springing toward you.

Because your helper will be handling the barbed wire just as much as you will, make sure that they’re also equipped with safety goggles, gloves and proper clothing. It’s best not to follow the precedent set by my grandfather, who once took down barbed wire with two of his grandchildren. With only two pairs of goggles on hand, grandfather selflessly gave the goggles to his grandchildren, figuring that if anyone was going to suffer an eye injury it might as well be him, since—at nearly 80 years old—he would have the fewest number of years to be blind. Fortunately, all went well, and he was fine.

4. Watch Out For A Buried Barbed-Wire Fence

Because many barbed-wire fences are old, the passing of time and years of grass growing up around the fence can conspire to pull down the lowest wires and bury them out of sight. This can be compounded if some of the old posts rot and fall over, dropping the wires to the ground and making it even easier for them to get buried.

As a result, take care to ensure that you don’t miss any wires while taking down the fences. You don’t want to start tugging on a post to remove it from the ground, only to have a previously unseen buried wire spring up at you. Before you start removing the wires, examine the posts to see how many wires are attached, and make sure that they’re all present and accounted for above the ground. If you do encounter buried wires, cut them into pieces as you carefully unbury them. Tugging on the wires to pull them out of the ground is not a good idea because you never know where the wire might come to an end. A sharp tug could cause the whole wire to spring out of the ground and fly toward you.

As you can see, taking down barbed-wire fences requires caution and patience, but when done properly, you can take down a fence safely and successfully, protecting your livestock from an unnecessary hazard.