Cutting-Edge Crops: How to Grow and Sell Saffron

Saffron carries a high entry cost, but in subsequent years this crop with three marketable elements can provide a big profit margin. 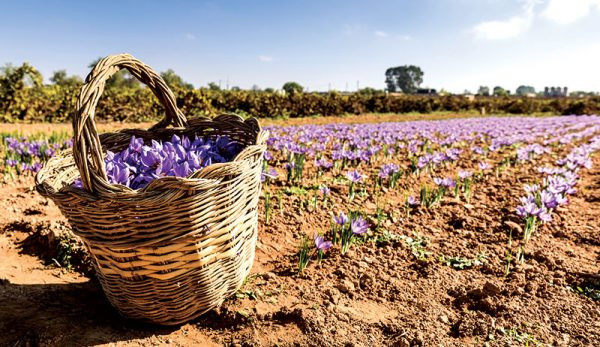 Saffron is the most valuable spice on Earth. It can sell for $10 to $20 per gram. (Gold was recently trading around $40 per gram.) So it might not surprise you that this āred goldā is also the most adulterated spice. And thatās not new. Merchants caught selling fake saffron in Bavaria in 1444 were burned alive. So if someone tries to sell you āsaffronā at a much better price, you might be looking at safflower (also called Mexican saffron) or even dyed corn silks. Let the buyerāand the seller, if youāre in Bavariaābeware.

That 1-gram container you might see in the store or online has stigmata (female parts) from 50 to 100 flowers and might be enough to flavor and color a big pot of paella or risotto. Despite being red, the stigmata give food a luscious yellow color. The name, saffron, comes from the Persian word sahafaran, that derives from asafar, which means āyellow,ā according to Sustainable Agriculture, Vol. 1.

What is saffron and what does it take to gather this crop? The spice is the red stigma of a fall-blooming crocus (Crocus sativus). The stigmata are also called āred threads.ā

When the flower with its honeylike fragrance opens in October or November, crouching workers harvest the entire flower in the morning and dump what they collect on a table. In the afternoon, workers pull the petals away from the three stigmata so they can dry separately; even the petals have a market. Theyāre sold in France for cosmetics, decoration and potpourri at $14 per ounce.

There is a third marketable crop. This crocus produces no viable seed, but the mother bulbs generate two to eight daughter bulbs every season. Those can be used to expand production or to sell to other farmers and gardeners at about 30 cents apiece.

Iran grows 90 percent of the worldās saffron crop, and that might be where saffron originated. The U.S. is the worldās biggest importer of saffron. It gets the spice from the Mediterranean, where most of the rest is grown. But the vast majority of saffron in the U.S. is bought by the pharmaceutical industry for making drugs that potentially combat depression and cancer.

When I first thought to write about growing saffron, I expected to recommend that farms on the West Coast in regions with Mediterranean climates and soils would have the best luck. But researchers at the University of Vermontās North American Center for Saffron Research and Development have had great luck growing this bulb thatās adapted to climates warmer and drier than New Englandās.

Saffron bulbs officially tolerate the cold weather of USDA Plant Hardiness zone 6. But they survive zone 4 in Vermont by spending their winters in the high hoop houses used to grow tomatoes in summer. So farmers can get two high-dollar crops from these structures. In a Vermont hoop house, farmers can gross $3.50 per square foot with tomatoes, while saffron can make $4 per square foot.

These researchers have figured out a way to give the bulbs the great drainage they like, protect them from rodents and make them portable between seasons. They grow them in milk crates lined with landscape fabric. At $4 apiece, the crates are the biggest startup expense. The researchers donāt mention it, but I suspect that old nursery pots would also work. Theyād cost nothing or next to nothing and would spare the grower the costs of lining the crates with fabric and securing the edges with duct tape. The larger nursery pots also have handles, like the crates.

The important news is that if farmers can grow saffron profitably in Vermont, you can pretty much grow it anywhere in the U.S.

Saffron bulbs come on the retail and wholesale markets in the summer. The bulbs are dormant in July and August (the driest months in the Mediterranean and central Asia) so thatās when they are dug up and divided.

By September, shoots start. By then the retail garden shops have marked them down, and that might be a good way for you to get a start learning about this crop on a small scale. Thatās what I did.

In fall, the bulbs come out of dormancy and send up leaves and flowers. If you have bulbs to plant, bury them deeply in the soilāabout 5 or 6 inchesāto promote flowering and division, and to protect them from mites. They like well-drained soil, phosphorus, potassium, a neutral-ish pH, some organic matter and a sunny site.

If you grow them in nursery pots or milk crates lined with fabric, put down a 4-inch layer of topsoil, set 11 bulbs pointy-side up, then cover with another 2 inches of topsoil. Top that off with 4 inches of perennial potting media mixed with compost. Water them well to get them started. Harvest flowers in the morning before they fade in the heat of midday.

Unlike common ornamental bulbs, which go dormant in the winter, saffron crocus grow during the winter, once they finish flowering. They still need sun and moisture. So you must ensure they get irrigation when nature doesnāt provide. If youāre north of zone 6, keep them in a high hoop house or even an unheated greenhouse to protect them from too much cold.

In spring, the bulbs use their accumulated energy to produce daughter bulbs. So even if youāve moved them out of the greenhouse or hoop house to make room for other crops, they need water to grow. By the warm end of spring, the leaves start to die back. Once dormant, crates can be kept somewhere out of the rain for July and August.

Bulbs should be dug at least once every four years to prevent overcrowding. Dig them more frequently if you have a market for bulbs, which should have a circumference of 4 inches if sold. Smaller bulbs can be used to start new production.

Rather than pawing through the container for bulbs, dump it out on a tarp. Gather and sort bulbs. Then replace the soil and fresh bulbs in the crates. Excess bulbs can be used in new containers or cleaned and sold. Just be sure not to offer up any fake ones.

Costs and sales from saffron grown in milk crates in a 30-by-90-foot high tunnel (figures from University of Vermont research):