I've already mentioned that as we’re revamping our farmhouse, we’re doing our best to salvage and reuse materials, such as wall studs, baseboards and doors, from the original structure whenever possible. 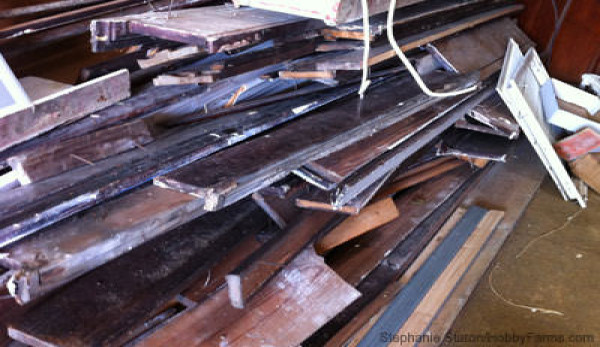 I’ve already mentioned that as we’re revamping our farmhouse, we’re doing our best to salvage and reuse materials, such as wall studs, baseboards and doors, from the original structure whenever possible. It’s important to understand that there are certain precautions and, in most cases, extra steps that you must undertake to properly repurpose these items.

In order for us to reuse the wall studs from the original structure, we had to rip them down to size. The old studs were true sizes, meaning that the 2x4s were precisely 2 inches by 4 inches. Today’s studs actually measure 1½ by 3½ inches. When we used the old studs in the mudroom, we left them as is because we didn’t mix them with new wood. However, in instances where we were mixing old and new along the same wall, we ripped the old ones down to match the 3½-inch width of the new ones so that they would align perfectly and not negatively affect the drywall installation later.

Although we didn’t go this route, another option would have been to leave the old wood its original size and use fir strips (thin strips of wood) to thicken the new wood so that it is flush with the old. They used this tactic in some places throughout the original house when they replaced sections of plaster or added onto the house.

Removing and saving the old mouldings and doors also took some prep work and precautionary measures: We carefully prised each piece off the wall, labeling the back side with a pencil so that we would know where it already fit as well as to keep track of pieces that went together, such as doors, jams and face moulding.

A mixture of old and new and large and small nails made for an interesting experiment in the best ways to pry off the moulding while minimizing damage. I found that short constant pressure was the most effective for me. I would start at one end and get it out, then work all the way down before coming back to further pry it away from the wall. Any use of wiggle and inconsistent pressure typically resulted in split wood.

Once the moulding is off the wall, you need to remove the old nails. Rather than try to hammer them back through the front of the wood, which could cause splitting and chipping, it’s best to pull the nail all the way through the back. Using a strong pair of pliers, you can gently pull it through with a slight twisting motion. If the nail is really stuck, you can use a piece of wood between your pliers and the back of the wood to provide leverage as you work the nail out. Do not wiggle or rock the nail as you pull it—this too could damage the front of the wood. The twisting action I used actually rolls the nail around the pliers working as leverage to pull it through so that the nail backs out of the wood without too much side-to-side action. Once you have the wood clean of nails, store them flat in a dry area out of direct sunlight to keep them safe until you are ready to reuse them.

Stephanie Staton is a freelance writer who burns the midnight oil to meet deadlines between homeschooling her son and chasing her two horse-poop enthusiastic dogs around the farm. She and her family split their time living on the family farm and in an RV that moves with her husband’s work.