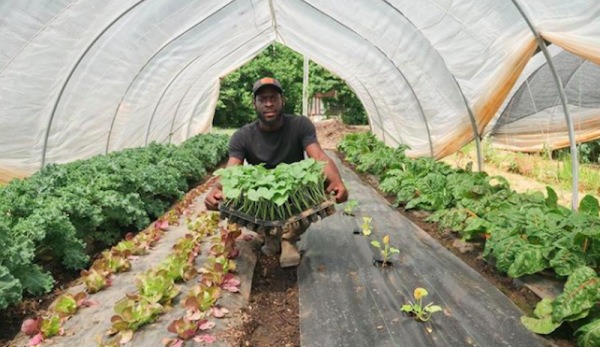 “I felt that farming would allow me to give to my community and give to my people in the most influential way,” says Kamal Bell, the founder of Sankofa Farms. Based in North Carolina, the locally-focused venture aims to improve the lives and welfare of people in need who find themselves living in food deserts.

Alongside helping to feed the community, Sankofa Farms also offers educational workshops. These include beekeeping initiatives and an agricultural academy that benefits students.

We spoke to Bell about taking the plunge and growing tomatoes, plus the dynamics of giving back to the community. We also got the scoop on how a student helped introduce bees to Sankofa Farms.

The Importance of Giving Back

Bell says he decided to pursue a farming life while working on his undergraduate degree in college. The potential to help his community in a direct way was a huge influence.

“I was sitting in my science class and looking at what my contribution to my community was,” he recalls. “I feel like it’s our duty to give back to people when we’re in a position to do so. We all have the capacity to give. I think that idea just stuck with me.”

Read more: Chef Brandon Peralta moved from the kitchen to the farm to support his community’s food needs.Â

“It’s rewarding to grow food and see how outcomes change,” says Bell. “You get what you put into it, and I like that process.”

Alongside feeding the community, the farm runs programs that target younger residents. “We have a youth academy, and we’re working with kids to educate them how to solve problems using agriculture,” explains Bell. “There’s a natural curiosity there, so it’s providing them with a platform to pursue that interest.”

Bringing on the Bees

The decision to add bees to Sankofa Farms originally resulted from student feedback.

“I was terrified at the time. But a student told me that if we got bees it would help keep him at the farm for a longer period of time,” says Bell. “So his curiosity … got us into bees, because I wanted to keep him engaged at the farm.”

Read more: At Palm Park Apiary, it’s all about bees and blooms.

Looking back over this year’s bounty, Bells says that he’s most proud of the tomatoes the farm produced.

“This was our first year, and I was fearful of growing them,” he admits. “But one of our farming mentors helped us out with the process and we were able to grow tomatoes this year.”

As for advice on growing tomatoes at home?

“Just make sure you prune the plants once a week,” says Bell.