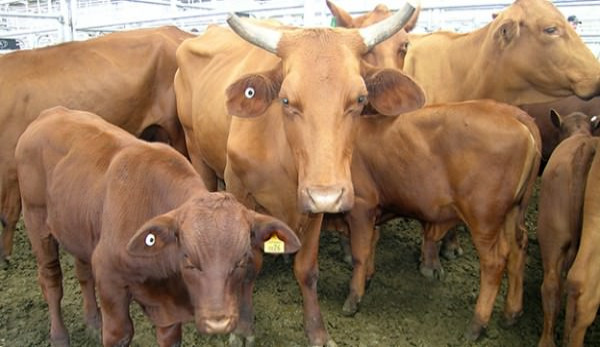 Use: Santa Gertrudis are beef cattle designed to thrive in hot, arid climates around the globe.

History: The name of the Santa Gertrudis breed of red beef cattle is from “Rincon de Santa Gertrudis”, the title of the original 15,500-acre land grant purchased by Captain Richard King from the heirs of Juan Mendiola of Camargo for the grand sum of $300. Thus in 1858, the King Ranch was born. As the years passed, additional land was added until at its extent, the ranch encompassed 1.2 million acres, making it one of the largest ranches in recorded history. The first cattle that roamed the vast Kingdom were native Longhorns. They were fully adapted to the harsh South Texas climate but they yielded a poor carcass. So, in the early years the ranch brought in British breeds like the Hereford and Beef Shorthorn to improve their stock but it wasn’t until 1918, when high-percentage zebu bulls came to the vast ranch to be bred to its Shorthorn cows, that real improvements occurred. In 1920, a red calf was born. Part Brahmin (zebu) and part Shorthorn, he was the best calf born at the ranch to date. During his 12 years on earth, he sired more than 150 bulls and became the foundation of the Santa Gertrudis breed. In 1940 the United States Department of Agriculture recognized 3/8 Brahmin and 5/8 Shorthorn Santa Gertrudis as a distinctive beef breed. The Santa Gertrudis Breeders International was formed in 195. Since then, 11,500 Santa Gertrudis have been registered in the United States alone.

Conformation: Santa Gertrudis are cherry-red with red-pigmented skin. They have deep, muscular, strong-boned bodies and large, semi-pendulous ears. Cows weigh in the neighborhood of 1,400 to 1,600 pounds and the average bull, 2,000 pounds or better. Some have short horns and some are naturally polled.

Special Considerations/Notes: Santa Gertrudis are exceptionally good foragers developed to thrive on the thin native grasses of the South Texas brush country. Cows breed young and produce well into their teens. They are very fertile and have exceptional mothering instincts. Calves are small at birth (so calving problems are rare) but due to their mothers’ heavy milk production gain up to three pounds of weight per day. Santa Gertrudis are noted for their even temperaments, hardiness, and disease resistance. Thanks to their zebu heritage, they have more sweat glands than most breeds of cattle, thus they dissipate heat in hot climates. They are, however, extremely adaptable, with herds kept as far to the south as Argentina and as far north as Upper Canada.