The American chestnut tree was once prevalent in the U.S., but it was wiped out by blight more than 100 years ago. Learn what's being done to help restore it. 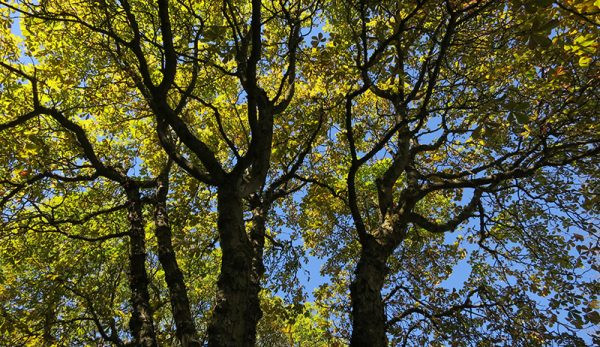 The chestnut blight came to U.S. shores via Europe through the East Coast on Chinese chestnut trees and quickly attacked the genetically unprepared American chestnuts.

Chestnut blight is a fungus that spreads via spores in the air, in raindrops or on animals; it attacks open wounds on the tree and enters through an injury in the tree’s bark.

The fungus spreads throughout the tree, killing tissue as it advances. Eventually, the tree’s metabolic system becomes choked off, unable to obtain nutrients. The tree eventually dies.

“There are between 100 million and 100 billion American chestnut sprouts growing in the native range [today], and most of these are blight free,” says Frederick V. Hebard, Ph.D., staff pathologist at The American Chestnut Foundation’s Meadowview research farms in Meadowview, Va.

“They temporarily escape blight because their blight-infected neighbors are too small to bear cankers that can give rise to more than one daughter canker per mother canker (the small cankers simply don’t produce enough spores). Thus, blight incidence remains at a low level, and the chestnut sprouts can live to be more than 40 to 60 years old.

“The sprouts remain small because they are in the shade of other species of trees,” Hebard continues. “However, when that overstory is removed by cutting, windthrow or other disturbance, the chestnut sprouts start to grow very rapidly.

“The sprouts increase their rate of diameter growth from less than 0.5 mm per year to 5.0 mm per year, or more. The increased sunlight also induces them to flower, and it is those trees that we pollinate.

“After one year, each of these daughter cankers gives rise to 10 granddaughter cankers and there are now 100 times as many cankers; after two years, 1,000, and after three years, 10,000 times as many cankers. Soon, almost all the sprouts that had been escaping blight for years are killed by it. Most of the sprouts are as susceptible to blight as the original chestnut trees.”

Efforts to Save the Tree

The U.S. government first became aware of the scourge of the Chinese chestnut blight in 1904, and realized the fungus’ potential to wipe out the American chestnut tree.

In an attempt to thwart the pest’s destruction, the U.S. Department of Agriculture and the Connecticut Agricultural Experiment Station launched programs to breed a blight-resistant American chestnut tree.

Because of limited knowledge of genetics at the time, these attempts at creating a resistant tree did not prove successful. Trees that were able to fight off the blight, including the Chinese chestnut, did not possess the desired characteristics of the American chestnut, which include tall, straight growth and a high-quality wood.

Discontinued in 1960, the government program did however succeed in providing a basis for The American Chestnut Foundation’s attack upon the blight.

In order to ward off the blight, American chestnuts must possess a genetic tendency toward resistance, a predisposition found in the Chinese chestnut, which only shows cosmetic damage when attacked by the fungus.

By combining the genes of these two trees, TACF is attempting to create a tree that will have all the attributes of the American chestnut, but will not be affected by blight.

The means to achieving this goal is backcross breeding, which calls for crossing resistant Chinese chestnut trees to American chestnut trees and then crossing back to native American three more times.

After the third backcross, the result is a tree that is only 1/16 Chinese and the rest American. Through intercrossing and further testing, scientists are able to determine which of these trees are highly resistant to the blight. The progeny of those trees that pass the test will be planted back in the forest.

How Hobby Farmers Can Help

The American Chestnut Foundation has high hopes for its backcrossed American chestnut trees, and has future plans for reforestation in the tree’s native range. This is where hobby farmers come in.

Currently, funds for research on the American chestnut tree come primarily from membership in the organization. Members receive a newsletter and are invited to attend TACF’s annual meetings to hear first-hand about projects and meet scientists working in the field of chestnut research.

They are also encouraged to visit, tour and help out on the organization’s research farms in Meadowview, Va., and have access to expert advice on growing chestnuts. Members are also permitted to purchase pure American chestnut seeds and seedlings through the organization.

Once the American chestnut is ready for reforestation, small farmers will be needed for a more hands-on approach, according to Dale Kolenberg, communications director for The American Chestnut Foundation.

“Farmers and other private land owners can get in touch with us to let us know they are interested in our reforestation efforts, and when we have our final product, help plant the blight-resistant trees,” she says.

With the help of those dedicated to bringing the American chestnut to its former glory, The American Chestnut Foundation hopes to see this regal tree once again dominating Eastern forests. A combination of advancements in genetic research and a passion for this special tree may actually make this possible.

This article first appeared in the March/April 2004 issue of Hobby Farms magazine. Pick up a copy at your local newsstand or tack and feed store.