As a garden supply staple, peat moss isn't always easy to avoid, but seeking alternatives is both possible and worth the effort. 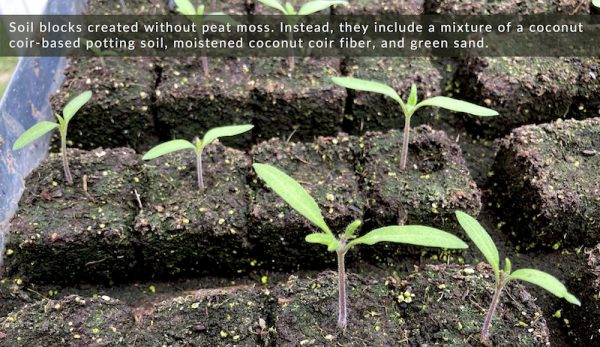 If you make your own potting mix or seed-starting soil blocks, your recipe probably requires at least some peat moss. In fact, myriad gardening books and magazines still praise peat for its ability to retain moisture and improve soil texture. The ingredient certainly has its benefits, but we’d all be better served by leaving more of this natural resource undisturbed.

â€śIf we weren’t in the state that we are with our climate, I think [using peat] wouldn’t be quite such a negative thing,â€ť says Briana Bosch, owner of Colorado-based Blossom & Branch Farm. â€śBut, because of the dire straits that we’re in with climate change and carbon emissions, we really can’t afford to be taking away such a massive sequester-er of carbon.â€ť

Bosch adds, â€śWhen [peat] is harvested, it actually releases that carbon, so then it becomes a contributor.â€ť

With that in mind, Bosch began combing her local gardening centers for peat-free alternatives last fall. Reading the fine print on product websites and packaging was somewhat disheartening. â€śThere’s really not a lot on the U.S. market that’s peat-free,â€ť she says. â€śPart of that is because so many people don’t know to ask [for peat-free products].â€ť

Bosch was able to find some peat-free options. She found a product called BeyondPeat at Wal-Mart, for instance. And she discovered FoxFarm’s Coco Loco potting mix, bricks of compressed coconut coir fiber and green sand.

â€śWe just kind of grabbed a bunch of stuff off the shelves,â€ť Bosch says. â€śAnd I said, ‘I’m going to try combining all of these things at different ratios and see if I can get a soil-blocking recipe that I’m happy with.’â€ť

After lots of trial-and-error, she did. (She shares her peat-free, soil-blocking recipe and pointers in this video.) â€śWe’ve had really good results with that,â€ť she says. â€śBut, of course, now we’re always trying to take the next step forward for sustainability. I started looking at the coconut coir, which has its own set of issues.â€ť

Read more: Soil blocks give your plant starts a leg up.

What’s the problem with coconut coir? For starters, processing it is very water-intensive. â€śIn its natural state, coconut coir tends to be really high in saline,â€ť Bosch says. â€śObviously, that’s not good in gardening. So, it takes a lot of water to process it to the point where we can use it.

“And water is a precious natural resource, too.â€ť

Also, Colorado isn’t exactly teeming with coconut groves. So, the resource travels a long way to get to Bosch’s farm. As such, she began a new search for gardening ingredients with an even smaller carbon footprint.

â€śEvery year we get more and more in depth with the sustainability piece of all this,â€ť Bosch explains. â€śIt’s our responsibility as growers to be cautious and mindful, because we do rely on the planet to make our living. Part of that is being responsible and taking care of [the planet] in return.â€ť

To date, Bosch has yet to find a potting soil mix that contains neither peat moss nor coconut coir. She has experimented with rice hulls, leaf mulch and leaf mold as potential substitutes. Bosch recently changed her soil-blocking recipe again. It now includes PittMoss, a blend of recycled cellulose fiber, as a main ingredient. With the new addition, she’s been able to reduce the amount of coconut coir she uses.

â€śThat was really intriguing, because it is material that was otherwise going to go to the landfill,â€ť Bosch notes. â€śIt’s OMRI-certified, so there’s nothing weird in there. It’s cellulose, and, so, its water retention is really good.

“We tweaked the [soil-blocking] recipe a little bit to make it work.â€ť

Read more: These 3 soil conditioners are even better than peat!

So far, the new concoction is working. However, finding a hyper-local resource that works just as well would be even more ideal. â€śStep one is to step away from peat moss and find something else,â€ť Bosch says. â€śAnd then the next, even better step is just finding something recyclable like the PittMoss. And then the best thing is to find something that is in your own yard. Or something that you’re reusing from the [local] environment.â€ť

Of course, accomplishing all that on a large scale doesn’t easily happen overnight. â€śEspecially with big operations,â€ť Bosch says. â€śIf someone is scared to do a big transfer, say, ‘OK. Next season we’re going to try starting a quarter of our seeds in something that’s peat-free.’ Then tweak it if you need to.

“And then in the [following] year you can expand. One step at a time.â€ť