Saying Farewell To A Chicken Friend

A chicken faces many threats throughout its life, but for this chicken-keeper, saying farewell to an older bird was the hardest loss. 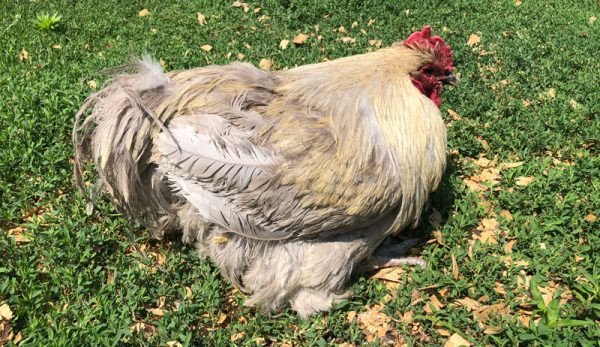 The hardest part about owning a backyard or small chicken flock is when one of our feathered friends nears the end of his or her life and we have to bid them farewell.

We all know that harsh weather kills, that predators attack, and that at times rehoming a bird is necessary. Old age, however natural it may be, makes saying goodbye so much harder. It’s difficult to bid a chicken farewell.

After all, we’ve had years with our roosters and hens. We have a history. One way or another, this chicken has influenced your life.

Thomas and Claude were more than just hatchmates. They were brothers.

Along with Davey, they were the three little cockerels that came from a clutch of two dozen Orpington eggs, sired by a blue-black-splash (BBS) father on black, BBS, and blue hens.

Thomas was a beautiful blue, while Davey sported black feathering. Claudeâ€”and their sister, Claudineâ€”were the surprise of the group: their pearly-pale grey down became lavender.

The three brothers had distinctly different personalities. Claude was the leader, the one who set the rules. He was the one who shepherded the flock to our kitchen door and taught them to sit and stare at us until we handed over treats.

Davey was the fun uncle, the one who’d dust bathe right alongside the girls, who helped raise chicks, and who went along with whatever his brother decreed.

Should you get a rooster? Here are the pros, as well as some cons.

And Thomas … Thomas was the problem child.

I’ve shared his antics before: his hit-and-run behavior toward the hens in the flock, his almost mocking attitude towards his brothers, his bad-to-the-bone, tough-boy act. He was the poultry world’s James Dean.

He eventually settled down and became an excellent guardian for the girls in his flock. Our older biddies, our Buff and Lemon Cuckoo Orpingtons, accepted Thomas as their leader. Amazingly, our Royal Palm turkey hens did, too.

Meanwhile, Claude and Davey continued to live together with the younger generation of Orpington girls.

When our black hen, Fitz, hatched her first baby, Ginger Bean, Claude chose to have nothing to do with the little cockerel. Davey, however, took him under his wing and could often be found keeping company with the little lavender juvenile.

Sadly, Davey did not survive that winter. And while Claude recognized Ginger Bean as a member of his flock, he did nothing to guide him like Davey had.

His traitorous sisters accepted Ginger Bean as their leader and Claude would flee the coop every morning, spending his days as a solitary old bull, returning only to roost for the evening.

Shortly, however, Ginger Bean barred him from entering the shelter at night. Poor Claude!

All our other flocks had a rooster, and I resigned myself to having him live with our crazy ducks, when the unthinkable happened. Just as Thomas herded his hens back to their coop for sundown, he vocalized to Claude … and Claude trotted out from under our deck to join his group.

The now-mellowed troublemaker had opened his home to his outcast brother, accepting him into his flock.

Here’s what to do if there’s a rooster coup in your coop.

Winter soon arrived and, with it, hungry predators looking for an easy meal. Having lost both of our Ameraucana roosters, Barack and Jefferson, the previous year, our Ameraucana girls had been on their own.

As much as I love those bearded, muffed darlings, they tend to be a little bird brained. I had plans to adopt an adult blue Ameraucana to take the helm of that henhouse, but my search yielded nothing but young cockerels, whom the older hens would eat alive (figuratively).

The Ameraucana girls had befriended Claude during his time as a solitary roo, however. It didn’t take long to convince me that Claude could be the girls’ new rooster. We would simply offer Easter Egger chicks instead of Ameraucana ones.

Everything went smoothly until this spring, when calamity struck Ginger Bean’s and Claude’s coops. Raccoons and opossum had managed to dig their way into these dirt-floor coops, killing five of our girls.

A full inspection of all our coops yielded dire results. The walls of both the Ameraucana and the duck coop had been compromised. There was no way these flocks would survive another night of predator attacks, even with my husband, Jae, sitting out with his shotgun.

The result? Ginger Bean’s flock had to be moved to our main Orpington coop. However, Thomas was now feeling his age and was nursing an injury (thanks to that ingrate Claude), who had sensed his brother weakening and challenged him for the alpha spot.

There was no way that Thomas would survive his strapping nephew moving in. Once again, our only option was moving Thomas to the duck coop.

We moved him with Mariel, one of his hens, so that Thomas wouldn’t be so lonely amidst the quackers. The rest of Thomas’ hens became part of Ginger Bean’s flock.

We upgraded Ginger Bean’s (and Claude’s) former coop, moved it to a new location, and moved the ducks, Thomas and Mariel into this new run. We then repaired and reinforced the Silkie coop (which had stood empty since the Silkie Massacre of 2019) and moved it to the former duck run, elevating it on concrete stanchions.Claude and his Ameraucana girls moved in.

The old Ameraucana and duck coops were dismantled and burned.

You can achieve chicken harmony with these 3 simple tips.

Unfortunately, Thomas and Claude were closer than ever now, and Claude once again tried to show his brother who was boss. I was so disappointed in Claude, who’d obviously forgotten how Thomas had taken him in when he was down and out.

Not disappointed but rather angered was Alex Royal Palm. She had enough of Claude beating up on her beloved Thomas. She flew out of the main Orpington run, landed in Thomas’ new run, and went into full display between the battling brothers, protecting Thomas with all her turkey fury.

Claude backed down really quickly. We let Alex move in with Thomas after that and had the rest of Thomas’ girls join him.

It was a good thing that we did, because Thomas sadly did not have much time left. He began to spend most of his days beneath the food shelter, where he could easily eat and drink and relax in the shade.

On July 3, I looked out the kitchen window to see Alex once again in full display, with Claudine and Mariel standing beside her by the food shelter. I knew then that Thomas had passed on.

It was my full intent to write about bidding Thomas farewell and to reminisce about how much he had changed, from young rapscallion chicken to the respectable man of the house.

However, when I went to lock up on the 3rd, I noticed that Claude was walking unevenly. He had suffered an unfortunate accident a couple of weeks previously during a severe storm that knocked out powerâ€”andÂ  knocked down treesâ€”in our area and.

While he remained stoic while I examined him, I was positive he had suffered some sort of injury.

By lock-up time on the 5th, Claude could no longer perch with the girls, resting on the floor of the coop instead. This morning, when I opened his pop door, Claude waited for his hens to exit. He then slowly shuffled over and did a somersault out the opening, laying still on the grass.

I quickly picked him up and ran to the house, calling for Dr. Michael, my veterinarian son, who had studied with the poultry scientists at Michigan State University.

He confirmed that Claude’s hip was damaged and his air sacs, too. “What do you want to do?” he asked me.

Farewell to a Chicken Friend

What could I do? It was time to steel myself to say farewell to my longtime chicken friend.

Claude, despite his recent shenanigans with Thomas, has always been my favorite. I taught him how to jump up for treats I’d hold out for him and how to perch on my arm. His photo hangs in the entryway to our house.

I wasn’t going to leave him alone to pass, not with those flighty Ameraucana girls. I spent today serving as his crutch, walking with him as he revisited his old coop, as he checked out his favorite shady spot under our deck one last time, as he went to our kitchen door to peer in at the cats.

Claudine, sensing something was up, left her group behind and basically shadowed Claude all day.

I hand-fed him crumbles and carefully dripped water onto his beak for him to drink, telling him what a wonderful rooster he has been and how Davey and Thomas would be waiting for him once he was at rest.

I found a nice shady spot beside his coop and made sure he was comfortably settled on the grass, then came in to write about two wonderful birds and their time with me.

And now that I’ve completed this piece, I am off to say what is undoubtedly my last farewell to my chicken friend.