As bumblebee populations continue to decline, a USDA entomologist searches for a replacement pollinator. 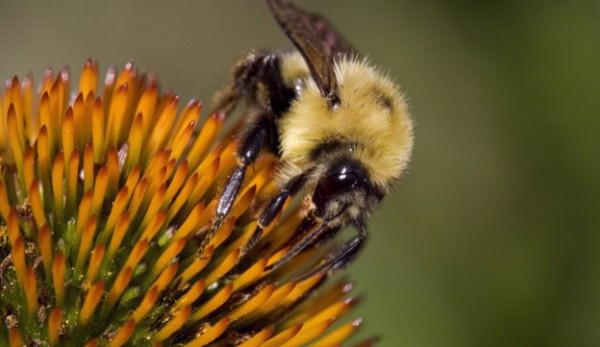 The plight of the bumblebee has been causing both scientists and farmers concern, with bumblebee populations declining over the past several years. Bumblebees, like Honey bees, are important pollinators of native plants and are used to pollinate greenhouse crops, likeÂ peppers and tomatoes. But colonies of Bombus occidentalis, used for greenhouse pollination, began to suffer from disease problems in the late 1990s and companies stopped rearing them. Populations of other bumblebee species are also believed to be in decline.

In addition to trying to learn the cause of bumblebee loss, USDA entomologist James Strange is searching for a species that can serve as the next generation of greenhouse pollinators. Strange performs his research through the Agricultural Research Serviceâ€™s Pollinating Insectsâ€”Biology, Management and Systematics Research Unit in Logan, Utah.

To understand the decline of B. occidentalis, Strange and his colleagues have been tracking its habitat range and population trends. Evidence theyâ€™ve gathered so far shows that the range and populations of B. occidentalis have declined, that it is not as genetically diverse as it used to be, and that it has higher pathogen prevalence than other bee species with stable populations. The results were published in the Proceedings of the National Academy of Sciences.

The researchers also have assembled a large database with information on more than 80,000 Bombus specimens representing 10 species throughout the country, including B. occidentalis. With Geographic Information System modeling technology, they were able to construct historic and current range maps of several bumblebee species.

OneÂ bee species Strange has been studying is an orange-striped generalist bee, Bombus huntii, native to the western half of the country, that could be used in greenhouses in the western United States. Heâ€™s determining how to best rear B. huntii in a laboratory setting, a vital step in commercializing it.

Many greenhouse growers now use commercially produced Bombus impatiens, a generalist pollinator native to the Midwest and eastern United States and Canada. But scientists are concerned about using a bee outside its native range. Some western states even restrict the import and use of non-native bees. If B. impatiens were to escape and form wild colonies in the western United States, they could compete with native bees for food and resources and expose native bumblebees to pathogens they are unable to combat.