Hannah Scott from the Kitsap County, Washington-based hobby farm talks about the heart-warming feeling that comes from growing and sharing food with the neighborhood. 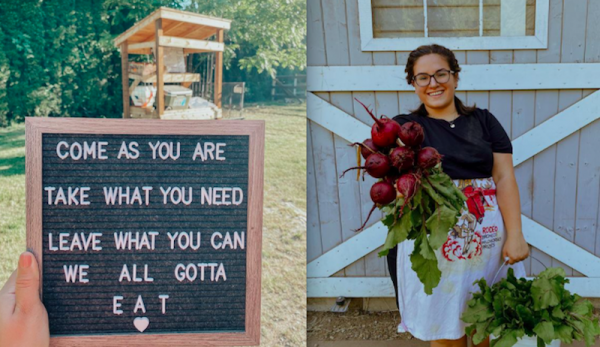 Situated in Kitsap County in Washington state, Scott Family Farm has expanded from its early roots providing food and nourishment for Scott’s immediate family to including a by-donation farm stand for the wider community.

“The opportunity to share what we grow with other people is so rewarding,” says Scott.

We spoke to Scott about striving to for self-sufficiency and the joys of living with a goose. We also got her tips on cooking with summer squash.

The Importance of Patience

“When growing your own food, things don’t always go right the first time or every time,” says Scott when talking about some of the early lessons she learned about farming after setting up Scott Family Farm. “So you really have to be patient and adapt.”

A community farm stand has become an integral part of Scott Family Farm. It’s an addition that came out of turbulent worldly circumstances.

“We wanted to be self-sufficient. Very quickly we realized we were growing things and we wanted to share with our community,” explains Scott. “It was 2020, Covid-19 was raging, food security was a real thing. Incomes were changing for people, so the opportunity arose for us to share what we had with the community. So our farm stand was born.”

This year, Scott says their garden was successfully expanded to around 1,500 square feet in a bid to satisfy the popularity of the farm stand.

Read more: Check out these tips for starting your own roadside farm stand.

The farm stand at the Scott Family Farm runs on a by-donation system. “We don’t expect anything from it,” explains Scott. “People just donate what they can and keep what they need.”

Scott adds that donations “go back into buying seeds for the next round of planting.” She also delights in seeing hand-written notes left in the donation box. “That just means the world. Having food to share with families in the community is just a really heart-warming feeling.”

This year, Scott says squash and carrots have been a hit in the garden.

“So far, I am loving the squash varieties we have been growing. It’s also the first year being successful with carrots, which was especially fun for the kids. It’s something they can pick out of the ground and get some reward from it.”

Scott adds that she defaults to dicing and sautéing squash in the kitchen. Also, blanching diced squash means it can be handily frozen for use in future seasons.

Read more: Are you ready to start your own “honor system” farm stand?

Get to Know Farrah the Goose

Beyond the farm stand, a goose named Farrah is one of the key components of Scott Family Farm. Farrah was originally added to the ranks to help protect the resident ducks.

“Geese are really good at calling out an aerial threat like a hawk or an eagle. That lets the other birds get to safety,” says Scott. “Now that I’ve had a goose, I think I’ll always have a goose. Their personalities are so fun!”

On a day-to-day basis, Scott adds that Farrah very much behaves like a dog. “She wants to follow us around, she wants to know what we’re doing. She wants to eat what we’re eating and just kind of thinks it’s her farm.”