Hobby farm founder Laurie Bizzell tells us how a chance meeting with a cow in Ireland inspired her to raise Scottish Highland Cattle in Tennessee. 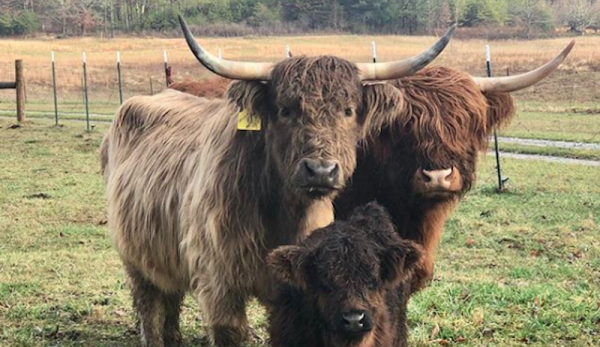 These supremely eye-catching livestockâ€”which resemble characters from Jim Henson’s The Muppets come to lifeâ€”are raised under the auspice of Laurie Bizzell. She started the venture a couple of years ago when the opportunity arose to move to more space in the country.

Little Tail Farms has since grown to offer farm-staycations, which allow visitors a first-hand farm experience. Bizzell says that it’s always a rewarding feeling to see people interact with her resident animals.

We spoke to Bizzell about the appeal of Scottish Highland Cattle and their social media star Bob. She also offered some encouragement for people wanting to start their own hobby farms.

The Beginnings of Little Tail Farms

“Initially I wanted a cow in my backyard,” says Bizzell as she recaps the founding of Little Tails Farm. “I’d traveled to Ireland when I was in my late 20s and fell in love with the cows that you could stop and pet at the side of the road. From that day on I talked about having a cow in my back yard.”

Learn more about keeping a family milk cow in your backyard.

Fast forward to a couple of years ago, and Bizzell was given the opportunity to fulfill her dreamâ€”which has now expanded to also take in alpacas, baby doll sheep, donkeys and chickens.

When asked what it is about Scottish Highland Cattle she appreciates so much, Bizzell says, “They’re so unique and much more domesticated than a regular cow.”

She adds that all of her cows know their names and “they come over to eat cookies.”

The star of Little Tail Farms is Bob. He was also the first Scottish Highland Cattle added to the farm.

“Bob’s a leader and he’s definitely the most popular on our social media accounts,” says Bizzell. “He’s majestic looking and he has fiery red hair and big horns. Bob knows his name and likes his cookies and loves to be brushed. He loves bananas and he’ll eat pumpkin. He’s beautiful to watch.”

Bizzell adds that recently Little Tail Farms had their first calf, named Lincoln. “He’s super cute,” she says. “All of our livestock are really pets.”

Getting to Know Scottish Highland Cattle

On a day-to-day basis, Bizzell says that Scottish Highland Cattle are definitely social animals. She mentions how Abigail, one of the resident cows, will happily enjoy a brushing session for a couple of hours out in the pasture.

“We get to share our love of livestock with people who’ve never seen it before. My parents had never seen goats. I’d never seen a chicken outside of the grocery store before starting this, and I had never held one or realized all the noises they make!”

Start Your Own Hobby Farm!

Bizzell is very enthusiastic about the prospect of other people starting their own hobby farms.

“I think anybody can do it,” she says in encouraging terms. “I think it’s a lot of fun and it’s very rewarding. It’s a dream that you can do.”