Scottish Highland Cattle (also known as Highland Cattle) are considered one of the best beef producers, as well as a provider of pelts, which makes them a great choice for cooler climes. 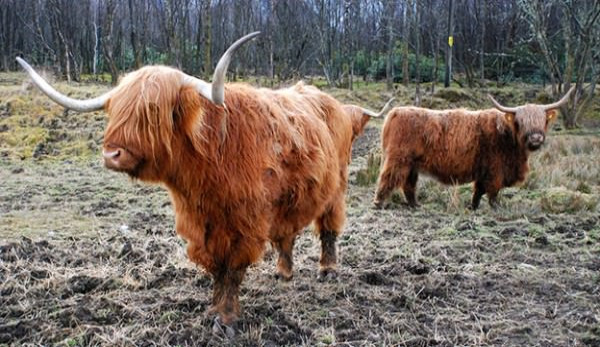 Use: Fanciers claim Scottish Highland (also known as Highland) beef is the best in the world: lean but well marbled, juicy and flavorful, it commands a premium price as niche-marketed beef. Because Highlands thrive on rough forage (they’re browsers as well as grazers, a trait not seen in less-primitive breeds) and they’re outstandingly hardy and long-lived, they’re arguably the ideal beef cattle for grass-based and organic beef producers in Canada and the Northern states. Their woolly mammoth hides and sturdy bones are another stellar feature. Pelts are readily saleable as lap robes and rugs; long-horned skulls fetch a pretty price as wall dĆ©cor; and soft, cushy winter undercoat is a spinners delight–and it’s combed out, rather than shorn! Folks who ride and drive cattle (and there are more and more of us every day) treasure Highlands for their eye-grabbing looks, solid physiques, and calm dispositions.

History: Scottish Highland cattle (also known as Highland Cattle) have been a colorful part of Scotland’s history since at least 600 A.D. Today’s Highlands descend from two groups of cattle: the small black or bridled Kyloes raised on islands off the west coast of Scotland and slightly larger, mainly red or yellow cattle native to the Scottish mainland. Written records go back to the 1700’s. The first Highland Cattle Society was chartered in Scotland as early as 1884. A first batch of Highlands arrived in the United States in 1893 and more followed during the 1920’s. They are currently the darlings of many a North American hobby farm where they provide tasty beef, fluffy undercoat fiber for spinning, and eye-candy for owners and passers-by.

Conformation: Scottish Highland cattle (also known as Highland Cattle) are short-legged, wide, deep, and very solidly built. Most Highland cows weigh 1,000 to 1,300 pounds; bulls and steers can weigh 2,000 pounds or more. They have short, broad faces ending in wide muzzles, with a thick shock of hair called a dossan that reaches from their horns to a point just short of their noses. They also have strong, sturdy legs; large hooves; and long, dramatic horns. Highlands come in an array of solid colors ranging from white to black with reds, yellows, duns, silver duns, and brindles in between. Their most striking feature is their shaggy hair, a trait that makes them appear prehistoric at first glance. Highlands are double-coated. Their long, coarse outer coat can grow up to 14 inches in length; this in turn tops a soft, highly insulative undercoat designed to Highlands them toasty warm at temperatures far below zero, even without shelters to shield them from blowing snow and ice.

Special Considerations/Notes: Highlands are wonderful cattle. Treated kindly they are docile, friendly, easy to contain and handle, and they are intelligent to a fault. They are also exceptionally long-lived and highly fertile. Cows often calve well into their late teens. Calves are small at birth, making calving problems rare indeed. While ideal for Northern climates, Highlands also adapt well to the Mid-Western states and the Mid-South. In Southern climates, summer access to a pond for leisurely, midday soaking is strongly advised.