Scratch Brewing Company co-owner Marika Josephson tells us how fallen leaves, chanterelle mushrooms and fermented acorns and are all part of the brewery's process. 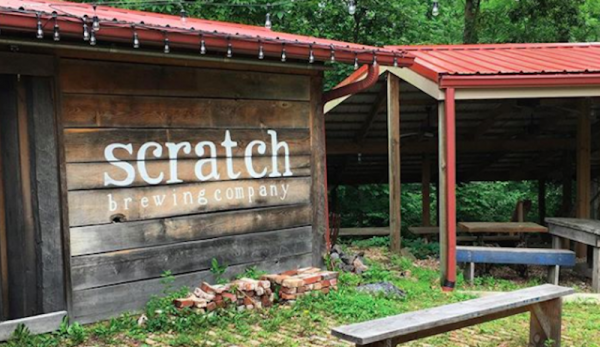 Situated a few miles from Shawnee National Forest in Ava, Illinois, Scratch Brewing Company is a farmhouse brewery that prides itself on the ways foraging for ingredients, as well as embracing a seasonal state of mind, directs their beers.

The roots of the venture stem back to co-owners Marika Josephson and Aaron Kleido’s home brewing days. They regularly tapped into the terroir of the 80 acres of woods that Kleido’s family owned.

“As home brewers who wanted to experiment with anything and everything, it was only natural that we started experimenting with the plants that were all around us,” recalls Josephson. “I suppose it was no coincidence that we built the brewery right on that land where we were first experimenting with those ingredients.”

Digging into Scratch’s story, we spoke to Josephson about fermenting acorns and crafting chanterelle-centric mushroom beers. We also got into how to use fallen leaves in the brewing process.

Dandelion are used several ways here, early greens are used on pizza much like one would use arugula, the whole plant roots and all boiled in the brewing process for bitterness, roots can be cleaned and roasted and used similarly to coffee in beer,and if youâ€™re really bored feel free to gather the flower blooms and add those to the fermentation when itâ€™s nearly over. #scratchbeer #foragebeer #maltlife

Looking back on Scratch’s early days, Josephson says that acorns, clover flowers and dandelions were the focus of their first forays into foraging.

“I remember using acorns early on, leeching the tannins from them and making a flour to use in the mash,” she recalls. “I remember brewing with clover flowers in a wit beer. And dandelions, of course! I always tell people who are interested in brewing with foraged ingredients to start with dandelions. They’re so easy to find, and everyone knows what they look like. And there are a lot of really interesting and tasty things you can do with them.”

Foraging provides a link between us and our ancient ancestors.

A Seasonal State of Mind

“Our beers are entirely seasonal,” says Josephson. “We match our fermentation profiles to the weatherâ€”lager-style beers in the winter and saison-style beers and sours in the summer. And we brew with ingredients we harvest around us during their respective growing seasons when they’re freshest.”

Josephson adds that preserving ingredients, including freezing fruit and mushrooms and dehydrating herbs and leaves, is also part of Scratch’s process.

Chanterelle haul in the last two days. We have enough for an 8bbl batch about 70lbs #scratchbeer #mushroombeer #foragedbeer

The land around Scratch brims with chanterelles during the summer. So it’s only natural that the mushrooms have made their way into beer.

Josephson says that they managed to harvest 120 pounds of chanterelles last year.

Describing the profile of Scratch’s mushroom-based beers, Josephson mentions how co-owner Kleido always “says that beer tastes to him like sticking your nose in a basket of freshly picked chanterelles: notes of apricot, butter, and freshly turned earth.”

She adds that last year they fermented their annual beer with a lager yeast. The apricot elements of the chanterelles came through more pronounced.

Dead leaves, we use oak and hickory primarily to add a soft tannin and a subtle wood aged character to beer. #scratchbeer #foragebeer

Josephson estimates that around half of Scratch’s beers use leaves in the brewing process.

“We use them fresh and green, dried, fallen, crushed, just about every which way,” she explains.

In particular, the brewery’s Dead Leaves & Carrots farmhouse ale was directly inspired by the smell of fall leaves. Josephson describes the smell as “that unique papery, earthy, spicy aroma you get when you rake up a bundle of leaves.”

Breaking down how fallen leaves are used, Josephson adds, “We collect a healthy pile of freshly browned leaves that look crisp and boil them in the beer for 60 minutes. The boil extracts a lot of tannins and brings in a backbone to the beer that we utilize in a number of other beers as well.

“Oak is best for this and makes up the majority of the leaves in that beer.”

Getting Experimental with Brewing Techniques

Asked about the most experimental brewing technique Scratch Brewing Company has developed, Josephson pinpoints the serendipitous use of fermented acorns.

“It was a total accident,” she says. “We had left some acorns in a Mason jar and opened the jar a year later to discover that they had started fermenting.

“But we just about fell over from the aroma. It had the most intoxicating smell of bourbon, madeira, leather, vanillaâ€”all of the amazing things you can achieve from long-term barrel-aging.”

She adds that the team at Scratch subsequently spent years figuring out the correct way to incorporate fermented acorns into beer. The wild yeast and bacteria in the acorns bring about a change in the beer.

Patio open from 4-8 today 12-8 Saturday and 12-6 on Sunday for beer no food yet so feel free to bring your own. All orders will be taken outside and all seating is outside. When entering the brewery for restrooms we ask everyone to have face coverings thanks

“Our brewery is a community and supports people in our community,” says Josephson when talking about Scratch’s relationship to the people living nearby.

“We’ve been able to employ two farmers on our payroll. And we buy directly from other local farmers when we can’t source from our own garden.”

Josephson adds that the brewery’s buying power allows them to foster and support local industry. “I’m proud that we can be a leader in supporting and sustaining a small, local economy,” she says.