Screws Or Nails: A Guide For Deciding Which To Use

In many cases you can use screws or nails interchangeably, yet one or the other has advantages in certain situations. Here are some where the choice is clear. 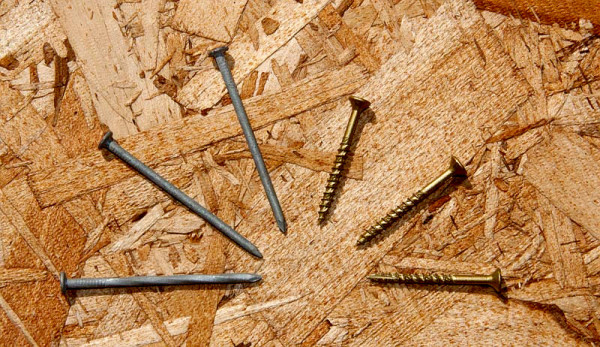 When I have a construction or repair project, I stop to ask myself whether screws or nails will be better-suited to the task at hand. Both are commonly used for projects involving lumberŌĆöbuilding horse stalls, working on fences, building a tool shed, you name itŌĆöand in many cases theyŌĆÖre interchangeable, with one being as good as the other.

But for some tasks when deciding on screws or nails, one has an advantage over the other. While thereŌĆÖs no way that I can list these advantages for every project you might encounter, I have gained a few insights from my own experience with screws and nails. Here are a few general pros and cons that I consider when choosing between screws or nails.

Pros: Because of their threaded design, itŌĆÖs nearly impossible to pull a screw straight out of its holeŌĆöyou have to physically turn the screw to remove it. This is an advantage in any scenario where you need to hold something together under pressure: Whereas a nail might slip back out of its hole, a screw is much less likely to do so.

Screws are also easily removable and reusable, making them suitable for use whenever you need to frequently repair or replace a given item. For example, I use screws on fencing projects so that if one of the posts rots or suffers some other form of damage, I can easily separate the post from the other parts of the fence.

Cons: Screws have two main disadvantages. One disadvantage is the huge variety of screw types on the marketŌĆöPhillips, slot, square, star, you name it. This means that in many cases, you need a large collection of screwdrivers and drill bits to handle any screw type you might encounter.

Another disadvantage: YouŌĆÖll need an electric drill for installing and removing the screws for most construction projects, at least ones that use screws of any significant size. This isnŌĆÖt a big deal, and itŌĆÖs nice to let the drill do the work, but it does mean that youŌĆÖll need to have batteries charged and ready whenever you need to use the drill.

Pros: Nails offer a number of subtle advantages over screws. For delicate work on small sections of wood that might be prone to splitting, nails can often do the job without damaging the wood. TheyŌĆÖre also the perfect choice for use with cloth and similar materials; the rotating action required to install screws can cause the cloth to wrap around a screw (a definite nuisance), so nailsŌĆöwhich are installed by pounding them straight into placeŌĆöcan be a better choice.

In addition, because nails require no rotation during installation, they are available in more unusual shapes than screws. For example, you can purchase nails that are shaped like staples, only much larger. This designŌĆöessentially two nails joined together by a curve of metal at one endŌĆöcan be perfect for projects such as attaching wire to fence posts.

A smaller benefit: The only tool you need to install or remove nails is a claw hammerŌĆöthe ultimate in portability, with no batteries or power source required. Even better, you know that a claw hammer will work just fine with the vast majority of nail types, making it a ŌĆ£one size fits allŌĆØ type of tool.

Cons: Perhaps the biggest con with nails is that they arenŌĆÖt as easy to remove as screws. In fact, removing nails can frequently cause cosmetic damage to the item youŌĆÖre removing them from. At the same time, nails are more likely than screws to pop out of place when under pressure; small nails in particular can work loose fairly easily and tend to have some trouble holding things together.

What factors do you consider when choosing between screws and nails?