Kip Ritchey of the Tallahassee-based farm tells us how they're aiming to solve their community's food desert problem. 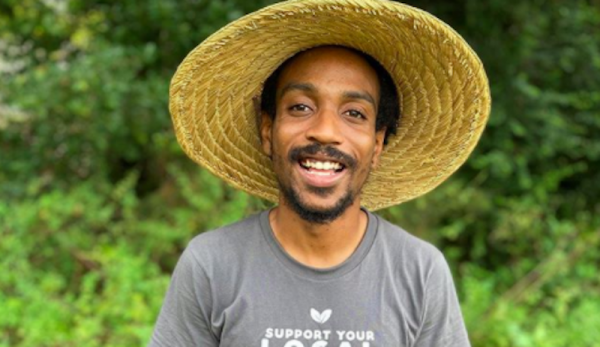 Angelique Taylor and Kip Ritchey founded Smarter By Nature when they realized their neighborhood in Tallahassee, Florida, is considered a food desert.

“There’s no available fresh food within a mile and a half of where we live,” recalls Ritchey. “We wanted to do something about that and grow food for our community. So we decided to turn our passion for growing food and plants into a business in our community.”

Since starting Smarter By Nature back in 2017, the sustainable venture has bloomed into a local hub that serves up a range of produce, as well as offering volunteer opportunities that help people from the nearby community learn how the food and growing process works.

We spoke to Ritchey about the importance of always keeping the community in mind and the benefits of growing marigolds on the farm. We also got into the meditative joys of using European scythes to tend to the land.

Thereâ€™s nothing like the excitement of a new growing season! This year weâ€™ve been starting early(on time?) with our planting and are excited to get the next batch of seedlings going. Some of our previous mistakes included planting late & under-planting which resulted in fewer harvests, but this year we chose to better ourselves by crunching down on the seedling process and getting them growing sooner than later. Some of our crops that weâ€™ve started include kale, broccoli, Brussels sprouts and collards. We will be getting onions ready soon as well as spinach and canâ€™t wait to share with you their growth! What are some things youâ€™re doing differently this growing season that you may have not done in the past? Let us know! ???âś¨ â€˘ â€˘ S/o to @naturesupplyco for the shirt.??? â€˘ â€˘ #local #supportlocal #supportsmallbusiness #regenerativeagriculture #urbanfarming #naturalfarming #sustainable #growth #permaculture #blackfarmers #gardening #marketgardening #plants #growingfood #growyourown #tallahassee #famu #smallscaleagriculture #smallscalefarming #farming #regenerative #natural

Ritchey says that when he and Taylor began Smarter By Nature, they were faced with two early obstacles to overcome. First, there was the task of securing sufficient space to be able to grow.

“After we got access to space, we had to go through the learning curve of dealing with climate and weather,” says Ritchey. “We live in a subtropical climate, and there’s not a lot of available knowledge for subtropical growing. It’s mostly catered toward temperate climates in the United States, so we had to research a lot to get up to speed.”

Harvesting brussels sprouts and cropping out the rest of our annual beds to prepare for the summer season. This field block was planted in September of last year and has blessed us with so much produce to share with our community! As we go through the seasons observing nature, we keep in mind the lessons we experienced and are willing to learn and grow continuously toward a sustainable future! ??â€Ť??âś¨ â€˘ â€˘ â€˘ #grow #farmer #nature #harvest #food #plants #crop #urbanfarming #brusselsprouts #blackfarmers #agriculture #nongmo #sustainable #sustainability #local #farmersmarket #womenwhofarm #regenerativefarming #tallahassee #tally #women #superfood #fresh #smallscalefarming #vegetables #whywegrow #florida

“For us, community is highly important because of the nature of our growing style,” explains Ritchey. “We lean less towards large machines and more towards hand toolsâ€”and with hand tools, having volunteers helps us out. We also look at it as a cyclical learning experience: People get to learn about the growing process and see the garden and the food process demystified.”

In an effort to minimize the power tools used on our farm, our tool of choice when it comes to maintaining our grassy area is the European Scythe. This light, sharp and quiet tool is custom-fit to the height of the user. With an upright swinging motion, the blade sweeps and clears the base of the grass and brush. Using this tool, we begin preparing new growing space as well as get a great workout! We are always open to trying new tools that align with our ethics and are also efficient and appropriate for the job at hand. ???âś¨ â€˘ â€˘ â€˘ #handtools #farmer #urbanfarming #scythe #farmfit #grass #grow #womenwhofarm #women #smallscalefarming #sustainable #sustainability #blackfarmers #agriculture #notill #regenerativeagriculture #tallahassee

European scythes are one of the key hand tools that keep Smarter By Nature running sustainably.

“I love them!” says Ritchey of the giant tools. “Using a scythe is a meditation. It’s something where you build your skill as you become more experienced with it. It’s a lot to do with breathingâ€”it’s a great meditation.”

Dear sword bean, we pray you grow to reach your full potential while in the earth. We thank you for all that you bring and will nurture you with love so that you may soar to your highest heights, Latom??????âś¨ â€˘ â€˘ â€˘ #planting #beans #legumes #grow #growing #growth #motivation #farming #urbanfarming #bean #growyourfood #gardening #farmer #permaculture #pink #hand #regenerativeagriculture #regenerativefarming

Vivid pink sword beans made an appearance on Smarter By Nature’s land this year.

“They’re a perennial bean and they grow pretty large,” says Ritchey. “They’re edible when they’re young pods but when they’re older you can save them for seeds. We like them because they fix nitrogen and they’re an aggressive vine that would make a great trellis.”

Read more: Beans are good to grow, and they’re great for your health!

The Power of Marigolds

Swipe left for butterfly photo-bomb! ?? Today was a day for harvesting marigolds! These flowers have been one of the most prolific flowers we have grown so far. This variety is called Tagetes erecta, Mexican marigolds or Aztec marigolds. Its beautiful blooms are edible and can be eaten in a salad, made into an herbal tea, or added to a tea bath! Marigolds serve many functions including attracting insects, deterring roaming deer as well as inhibiting the growth of nematodes in the soil that feed on the roots of some plants such as carrots. We love our integrated pest management strategies and are grateful for our marigolds this season! What flowers do you grow to promote beauty and function in your space? Let us know!??âś¨ â€˘ â€˘ â€˘ #gardening #marigolds #flowers #organic #growyourfood #growyourown #garden #regenerativefarming #regenerativeagriculture #sustainable #tallahassee #blackfarmers #cutflowers #smallscalefarmer #marketgarden #urbanfarming #orange #tea #herbal #harvest #nature #grow

If you scroll through Smarter By Nature’s social media feeds, you’ll notice that marigolds make a recurring appearance on the farm. Ritchey says that planting marigolds brings numerous benefits to the land.

“Marigolds attract pollinators like butterflies and various types of bees,” he says. “But they also suppress nematodes in your space. Nematodes are responsible for often causing root rot, so being able to suppress them is good.

“Also, deer and rodents don’t really like marigolds. We went big and planted a lot of marigolds, and we noticed they helped suppress the weeds in our growing space, too.”