Uzzi and I hardly ever think of cats because Dad is allergic and we don’t have any. That’s sad because Mom and Dad love cats. 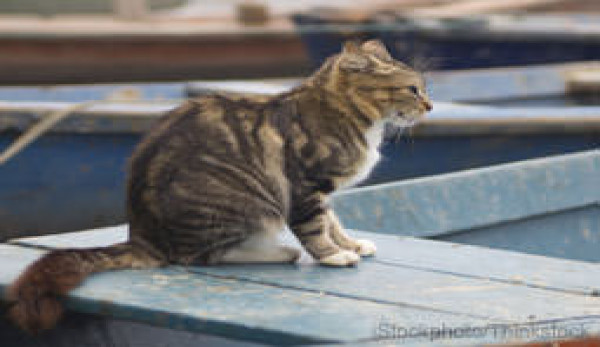 Uzzi and I hardly ever think of cats because Dad is allergic and we don’t have any. That’s sad because Mom and Dad love cats.

We learned a thing or two about cats while researching last week’s blog about Simon, the seafaring cat. For one thing, cats like Simon are a tradition aboard ships. Without cats to keep them in check, rats gnawed important ropes and helped themselves to the crew’s food supplies. (Rats were a liability, particularly on ships that transported grain.) At the same time, ship’s cats raised morale for sailors who were far from home for long, long times. Yay, cats!

There were many famous seafaring cats besides Simon, like a cat named Unsinkable Sam. In the early days of World War II, he was the black-and-white spotted ships cat on the German battleship Bismarck. Only 116 out of over 2,200 German seamen survived when the Bismarck sank during a fierce sea battle on May 27, 1941. Men aboard the British destroyer, HMS Cossack, saw a cat floating on a plank. They took him aboard and named him Oscar. Five months later, while sailing from the port of Gibraltar, the front part of the Cossack was blown apart by a torpedo from a German submarine, killing 159 of the crew. Oscar survived. He was taken aboard the British destroyer, HMS Legion, and transferred to the aircraft carrier, HMS Ark Royal. Less than a month later, a submarine torpedoed the Ark Royal. The cat survived yet again, but that marked the end of his seafaring career. His official name became Unsinkable Sam and his new job was mouse catcher to the governor general of Gibraltar. Sam was eventually taken to Britain, where he spent the rest of his life at a home for old sailors. He died in 1955, at least 14 years after becoming the Bismarck’s ship cat. His portrait hangs in the British National Maritime Museum in Greenwich.

Sometimes ship’s cats seemed to know when trouble was brewing. On May 28, 1914, while in the port of Quebec City, a ship’s cat on the ocean liner RMS Empress of Ireland, abandoned ship and no one could coax her aboard. She was last seen on the roof of a shed at Pier 27, watching her ship leave port. Early the next morning the Empress collided with another ship at the mouth of the St. Lawrence River and quickly sank, killing more than 1,000 people.

In 1975, the Royal Navy banned cats and other pets from British governmental ships, though some, like the famous Chibbley, a ship’s cat on the tall ship Picton Castle, still serve on private vessels. Crew members rescued her from an animal shelter, and by the time she died in 2011, she’d sailed around the world five times. Another famous cat aboard a tall ship is Toolbox. She was born in a toolbox aboard the Kalmar Nyckel while the ship was being built in 1997. Toolbox is the star of two books, and because she was born on the ship, she has the greatest accumulated sea time of any member of the crew.

Of course, not all famous cats are seafaring cats; some cats even live on farms. I’ll tell you about some of those next week!