The Secret To Free Firewood

Oak pallets can lower your winter fuel costs—if you can source them. 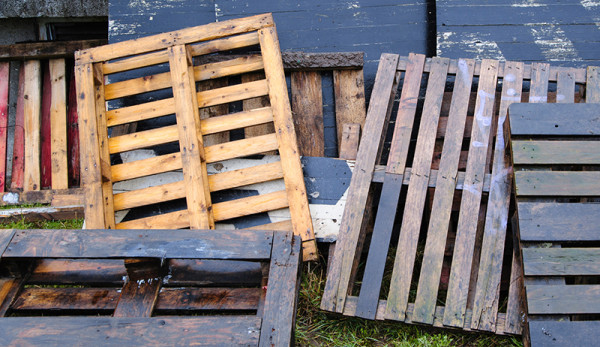 Firewood is a low-tech heat source, a renewable resource and, if handled correctly, a source of family fun. But it can have some challenges, too. Seasoned firewood can be expensive or unavailable when you need it, and procuring your own firewood calls for time spent splitting logs and doing it well in advance of winter so it can dry out in time.

For the last two winters, I’ve been heating my 1,400-square-foot home with free, seasoned oak that I get from stone yards, which use beefy oak pallets that hold extra-heavy loads of flagstone. I’m not talking about the common pine pallets, which are the kind you see piling up behind big-box stores. Those weigh noticeably less than oak ones and are fine for tossing into bonfires, but burning pine at home would send a lot of creosote up your chimney and perhaps lead to a chimney fire. For fireplaces and woodstoves, you want to stick with hardwoods.

If you’re concerned that the pallets might contain chemicals, rest easy. Because they don’t carry food or travel across international borders, oak pallets are simply dried in a kiln, which safely kills any pests without chemicals.

As a stonemason, I first noticed the heavy-duty oak pallets when stone yards began selling what they call stand-up flagstone. These pieces of rock are so big that if they were laid down, they would be too wide for the pallet. A normal-sized pallet only works if the flagstone stands up on end like a row of books. To do that, you need a pair of bookends to hold the flagstone upright in transit. For the whole thing to be strong enough to hold together and support the extra weight, you need oak pallets.

One day, when I had five of these oak pallets to deal with at the end of a job, I had a revelation: If I used them for firewood, I could cut my heating bill and also avoid the expense of dumping them at the landfill.

You don’t have to be a stonemason to take advantage of this free resource. Stone yards have a lot of surplus and broken oak pallets that they take to the landfill, and many of them would be happy for you to take the pallets off their hands—as long as you get permission first. Try persuading a stone yard to set their oak pallets aside until they could run a dump truck full out to your place so they could be rid of them without paying landfill fees.

Most stone yards are in rural areas, too—or at least close to one. I live in a city of 200,000 people, and there are four stone yards within a 30-minute drive that let me load used pallets into my pickup truck.

Pine pallets are light, but oak pallets are too heavy for one person to lift over the side of a truck bed, and that density indicates a lot of BTUs. Some stone yards will load the pallets for you with a forklift. In most cases, there are only two or three or four pallets available at a time, and I can stack those flat in my midsize pickup-truck bed so they won’t slide out. If there were more, I could stack them in the truck upright—again like books—and could probably get eight or nine in the truck that way.

Don’t forget the oak bookends that come with these pallets, either. I grab as many as I can and tuck them into the bed, too. When I get home, I carefully stack them so the edges are all aligned, making it easier for my chain saw to cut through the stack from top to bottom with maximum efficiency. My woodstove is big enough that I only have to cut a stack of bookends in half with one cut. Be careful cutting through the bottom bookend, though: If you hit the dirt or driveway beneath it, you’ll dull the chain. You may want to lean the last bookend against something or raise it off the ground to preserve your chain. Even if you don’t use full pallets for firewood, the bookends are a good way to go.

The pallets also go into a neat pile like the bookends, but I handle them a little differently. If the pallets are dirty, I blast the dirt off with a sweeper or jet nozzle on the end of my garden hose. It concentrates the force of the water so I can blast mud and grit off the pallets to keep the dirt from dulling my chain.

To wash them off efficiently, flip a pallet off the truck so one edge is on the ground and the other is leaning against the open tailgate and blast the exposed side free of dirt. Then, flip the pallet again so the wet side is flat on the driveway and blast the other side clean. The next pallet on the truck gets the same treatment and is flipped on top of the first pallet and so on until I have a neat pile of five or six clean pallets.

With each pallet oriented the same way and with their edges lined up, I can drop my chain saw through the stack in areas where I won’t hit any nails. Pretty quickly, I have a blocky pile of ready-to-burn oak that I can load on a wheelbarrow and carry to the wood shed.

If you do happen to hit a nail, the chain will dull and perhaps derail from the bar, so double-check your stacking technique to avoid that.

Because pallets have a short lifespan, the heads of the cheap nails in pallets are a rusty reddish-brown, indicating they haven’t been galvanized, aka coated with zinc. If you see gray nails that look zinc-treated, the zinc could cause problems for a catalytic converter if one was present in your woodstove. Because most stoves don’t have a catalytic converter and the vast majority of nails in pallets aren’t galvanized, this likely won’t be an issue, but it’s something to be aware of.

Once the chunks of oak have burned in the woodstove or fireplace, the steel nails will be left among the ashes. If you dump your ashes in the trash (after they’ve cooled in a metal container) then you don’t need to do anything about the nails.

If you want to use the ashes in your garden as an alkalizing amendment—it has 1/3 the strength of lime—you can remove the nails from the cool ash with a magnet. To speed things up, you can use a long wheeled magnet with a handle that carpenters roll over their job sites like a vacuum to suck up stray nails.

I use one to extract the nails from the cooled ashes. Hold the magnet up and swipe off the nails so they fall into a bucket. I’ve upgraded to one with a feature that allows me to disengage the magnet as I hold it over the bucket. The nails drop right in. At the end of the season, the nails go to the scrap yard and the ashes go into my garden.

I use a chain saw with a 14-inch bar to cut the pallets, but the longer the bar, the longer the chain will be, and that means you can go longer between sharpenings. Because the motor is bigger, the cutting will go faster.

There are a variety of chains available. Get several chains made for cutting hardwood. They cost more than chains for cutting softwood, such as pine, but they will hold an edge longer. You may also want to switch the bar to one that cuts a wider kerf (the width of the cut) to speed things up. Be sure to let your dealer know which kind of bar you have.

Your chain-saw supplier will also be able to sell you a kit for hand sharpening your chains periodically. I have one, but it hasn’t seen a lot of action since I decided I’d rather just drop off my dull chains and pay someone to keep them sharp. That usually runs about $6 per chain, but I think it’s worth it.

I live in zone 7 in North Carolina, so we might be burning a fire in the woodstove as our primary source of heat from mid-November to end of March. At the beginning and end of the season, we just burn a fire through the night. At the height of the season, it’s burning 24/7 unless I’m letting it cool enough to clean it out. By my estimates, one pallet lasts almost two days. But your mileage will vary depending on the quality and size of your stove, the efficiency of your house and weather conditions. Either way, you’ll save a bunch of money and time, get a good workout, and keep a valuable resource out of the dump.

Sturdy work gloves will keep your hands from filling up with splinters when prepping your pallets. As chain saws are loud, hearing protection is a great idea. And a chain saw will throw wood chips in your face, so a face shield is a good investment.

Cutting wood is no time for planning the weekend or engaging in any other type of multitasking. Knowing two men with chain-saw scars on their faces helps me keep my attention focused on my work. It also helps me resist the tendency to hold the saw so that it lines up with my face. If the chain catches on a knot or something and kicks back, it will go straight up and I’ll end up looking like those other two guys. So I keep the saw lined up with my right shoulder. That way if it kicks back, it will go safely past my head and over my shoulder.

I’ve never had a kickback problem, but I’m sure those two guys felt perfectly safe until their chains bit them. Better safe than sorry. Stay focused, use safety gear and be prepared for the worst. Chain saws are one of my favorite tools, but I want to be ready if mine goes astray.