See How One Man Converted A Playhouse Into A Chicken Coop

The best DIY projects are the ones you can make out of something you already own. 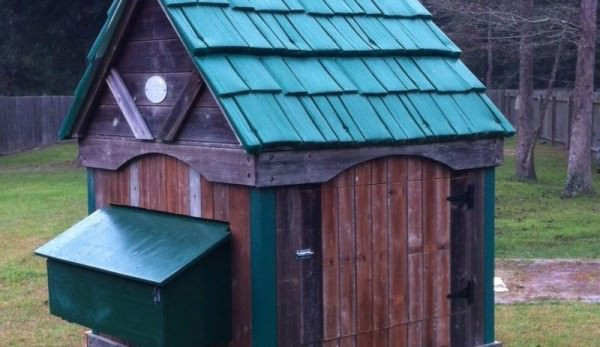 Do you have an old piece of furniture youŌĆÖre thinking of throwing out? What about a car, sweater or pillowcase? Rather than throw it out, upcycle it. Upcycling is a great way to turn a throwaway item into something worth keeping. Instructables user, flodato, learned that very thing when he decided to convert is childrenŌĆÖs old playhouse swing set into a chicken coop.

The married father of five had previous experience with chickens, though it didnŌĆÖt go as well as heŌĆÖd have hoped.

ŌĆ£My wife and I tried our hand at chickens about three years ago,” he said on Instructables. “We loved having them, but we made some mistakes in our setup that ended in the termination of our chicken ownership. We mixed aggressive and passive breeds, had a big coop that was built by a rookie and our run was in a damp area that bred mosquitoes. Our poor girls were featherless on their butts from brutal attacks from the other chickens establishing dominance. They would go to sleep at night and get eaten alive by mosquitoes since they had no feathers to protect them. In addition, I built the first coop with a chicken cloth bottom to ŌĆśmake cleaning easier.ŌĆÖ So, Craigslist helped me offload the chickens and the coop in about two hours! Ever since, weŌĆÖve missed having them.ŌĆØ

With the price of eggs rising and their desire to have chickens not waning, flodato decided to take down the swing set that had seen better days. He saw almost immediately that the playhouse on top of the swing set would make the perfect chicken coop.

Before starting, flodato created a purpose. It was ŌĆ£to get farm fresh eggs by creating a healthy, mostly bug-free environment (inside the coop) for 6-9 chickens that will also fertilize our raised garden beds,ŌĆØ he wrote on Instructables. The elevated coop would have three latched doorsŌĆöone for the chickens, one for a human to run and one for human access into the coop. The chicken door would also have a ŌĆ£critter-proof latch.ŌĆØ There would be two to three external nesting boxes with doors, access to which would not require entering the coop. They would also have an easy-to-clean floor. Watering, feeding and transportation would be convenient for both the humans and the chickens.

So how did he do it?

After writing out the purpose, flodato drew up a plan.

He then elevated the coop using posts from the main part of the swing set.

His next step was to add a ramp for the chickens, which he made from the railing of the swing set.

After that, the external nesting boxes and door were completed.

Once all of that was done, flodato focused on the inside of the coop, which included installing perches and peel and stick vinyl tile flooring. He added sleds to the coopŌĆÖs legs for easy transportation. Since finishing the coop, flodato and his wife have obtained five chickens: four hens and a rooster.

For more on this upcycled chicken coop, visit Instructables.