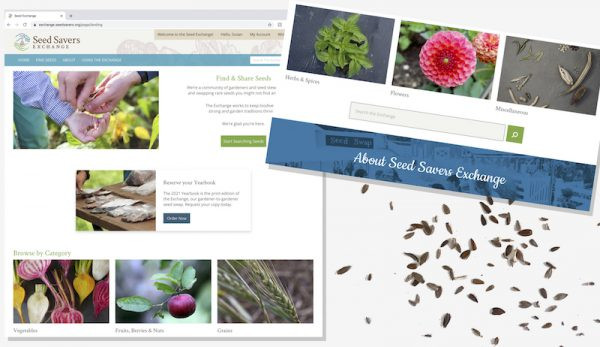 Think of it as the mother of all seed swaps. The Seed Savers Exchangeâ€”now in its 45th yearâ€”started with just 29 participants long before the internet even existed. These days it’s a robust, online community of gardeners sharing open-pollinated and heirloom seeds.

Read more: Increase your sales of plant starts by selling through an online nursery.

â€śWe do have some things on the Exchange that aren’t offered anywhere else,â€ť Gilbery says. â€śWe have a woman in North Dakota who’s offering a pink morning glory. It was originally a blue morning glory and then her plant threw off a sport.â€ť

She continues, â€śThat doesn’t mean that the seed was crossed or that a mistake was made…. Somewhere hiding in the genes of the seeds, there was an attribute for pink. So, she had one pink flower one year.

“She saved seeds from that flower and has since re-generated them for about seven growing seasons. She has now stabilized it and has a brand new pink morning glory that isn’t available in any commercial catalog.â€ť

The Exchange is home to many interesting open-pollinated and heirloom varietiesâ€”including some you might never have heard of. â€śWe’ve had tubers from skirret, which is an old vegetable that was popular in Roman times,â€ť Gilbery notes. â€śIt has a parsnip flavor.â€ť

The seed-sharing program makes a voluminous, printed catalog available, and folks offering seeds on the Exchange receive a complimentary copy. The print catalog is also available for sale.

The greater genetic diversity that seed-sharing provides can provide an edge for gardeners facing climate change, too. Case in point? There are multiple listings in the Exchange for certain varieties like the Black Krim tomato, but some of these might be better suited for you than others.

â€śSeeds grown by home gardeners are more genetically unique and more adapted to their regions,â€ť Gilbery explains. â€śSo, you could find somebody who is offering Black Krim that has the most similar growing region to you. Maybe that is somebody in Colorado who is growing it at high elevation. Or you might want to get [Black Krim] from somebody who’s growing it in a really hot climate like Alabama or Texas.

“That’s another benefit of requesting seeds from folks on the Exchange.â€ť

Read more: Interested in saving seeds from your tomatoes? Here’s how!

Want to offer your own open-pollinated or heirloom seeds on the Exchange? You can sign up for a free, online account and do so anytime. However, if you want your contributions to be included in the print catalog, the clock’s ticking.

â€śNovember 27th is the deadline for us to compile the ’20-’21 [catalog], so it can go to print and get mailed in January,â€ť Gilbery says. â€śBut folks can list their seeds at any time of the year, and they’ll be visible online on the Exchange website.â€ť

The Exchange doesn’t accept varieties that are patented, genetically engineered, crossed (or potentially crossed) or unstable. Other no-gos include F1 hybrids and poisonous, noxious, controlled or illegal varieties.

You also need to have grown out the seeds yourself before offering them on the Exchange.

And, whether you’re offering an heirloom bean that’s been in your family for generations or something more recent, provide details. â€śDocument the source history as much as you can,â€ť Gilbery recommends. â€śLet them know, ‘I got this from my barber,’ or ‘I got this from my neighbor….’â€ť

No one wants to run afoul of seed-selling laws. That’s why Exchange listing prices solely cover shipping and handling associated with fulfilling seed requests. â€śIf you’re asking to be compensated for the seeds themselves, that’s when those regulations kick in and you would need a germination test, licensing and things like that,â€ť Gilbery says.

Not sure you have enough seeds to contribute to the cause? You’ll need to be able to provide at least 25 seeds per request that you receive from the Exchange. Having enough seed to fill at least five requests is a good start if you plan to be included in the print catalog.

If you have less than that, you can opt to list exclusively in the Exchange’s online catalog. Once you run out of seeds, you can simply remove the listing.