Last week, I told you about Private Derby, who is mascot of a military unit, the 2nd Battalion Mercian Regiment (Worcesters and Foresters) in Derby, England. He’s the only sheep military mascot Mom discovered when she researched The Backyard Sheep, but there have been oodles of military goats! 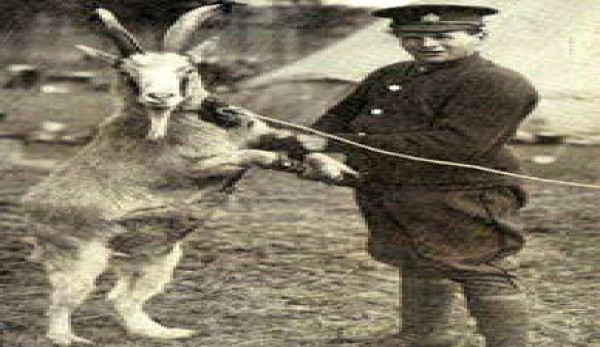 Last week, I told you about Private Derby, who is mascot of a military unit, the 2nd Battalion Mercian Regiment (Worcesters and Foresters) in Derby, England. He’s the only sheep military mascot Mom discovered when she researched The Backyard Sheep, but there have been oodles of military goats!

Nowadays, regimental goats like William Windsor of the 1st Battalion of the Royal Welsh, an infantry battalion in the British Army, are kept for ceremonial purposes. In former times, they went to war! Mom’s favorites are World War I and II heroes: Air Commodore William de Goat, mascot of the British 609 West Riding Squadron of the Royal Air Force during World War II, and Sergeant Bill, who served in France in World War I as part of Canada’s 5th (Western Cavalry) Battalion. This is Sergeant Bill’s story. (If you like these historical sketches, please comment and I’ll tell you about William de Goat another time)

On Aug. 23, 1914, a train carrying soldiers of the newly mustered 5th (Western Cavalry) Battalion stopped at Broadview, Saskatchewan, Canada, where a group of recruits spied Miss Daisy Curwain and her cart goat, Bill. They asked Daisy if they could have her goat as their mascot. She said yes.

Private Bill proceeded with his new family to Valcartier training camp, then overseas to England. Finally, the unit received their orders to proceed to the front. No regimental pets, however, would be allowed go along.

The men of the 5th had other ideas. According to Sergeant Harold Baldwin, who wrote a book called Holding the Line while serving on the front, “We could not part with Billy; the boys argued that we could easily get another colonel, but it was too far to the Rocky Mountains to get another goat. The difficulty was solved by buying a huge crate of oranges from a woman who was doing brisk trade with the boys. The oranges sold like hot cakes and in a jiffy the orange box was converted into a crate and Billy shanghaied into the crate and smuggled aboard the train.”

Bill was famous for drinking canteen beer and eating important papers left lying around. However, Bill redeemed himself and earned the rank of sergeant at the Battle of Ypres when he was found in a shell crater standing over a nervous Prussian guardsman, even though he himself had been wounded by shrapnel. Bill was gassed with his boys at the Second Battle of Ypres, fought at Vimy Ridge, was shell shocked at Hill 70, and was wounded twice at Festubert, where he knocked three soldiers into a trench seconds before a shell burst exactly where they had been standing. By war’s end Bill was one of the few original soldiers of the 5th still active. He was awarded the 1914-1915 Star, the British War Medal and the Victory Medal, for his proud 4½ years of service.

Despite immigration problems, Bill returned to Saskatchewan with his unit, where it was demobilized on April 24, 1919. He was later returned to Miss Curwain in Winnipeg and lived several more years. What an exciting life for a goat!