Plan a coop that won't interfere with neighborhood aesthetics. 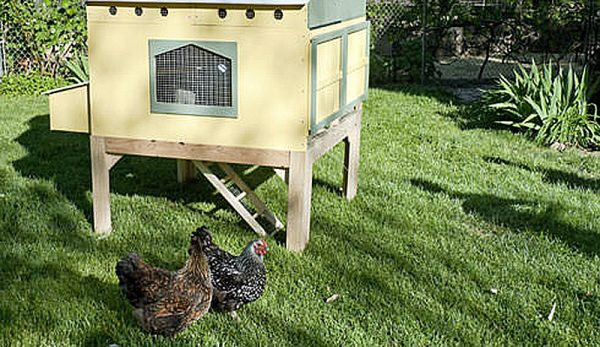 Many citiesâ€”Seattle; Madison, Wisconsin; New York City; Albuquerqueâ€”are welcoming chickens in residential backyards, but as with any enterprise in our complex world, raising chickens is subject to a variety of local zoning and land-use laws and regulations.

In keeping chickens, one of your first considerations should be where theyâ€™ll live once you get them to your backyard. Determine theÂ legal constraints placed on chicken coops in your neighborhood. I called my city and county planning department and found staff members cooperative and helpful. Chickens have become so popular that thereâ€™s probably a go-to person for chicken-keeping questions in your city government office, too. Typical limitations put on chicken keeping are the number of chickens, roosters (which usually arenâ€™t allowed) and the distance they must be kept from dwellings. Many communities regulate chickens based on past complaints, including noise, sanitary concerns and chickens running astray.

Choose a site for your chicken coop thatâ€™s well drained so moisture wonâ€™t pool around it. Southern exposure will provide good sunâ€”something every chicken loves. Consider prevailing weather patterns and situate the door appropriately so your coop is protected from wind and rain.

Plan a chicken coop that will blend with the neighborhood aesthetics. Architecturally inclined chicken keepers design coops to complement their homes. If your city has a chicken coop tour, youâ€™ll be inspired by the creativity of other coops. Even without a formal tour, fellow chicken owners will likely be more than happy to let you explore their coops for design ideas.

Give an existing structure, such as a garden shed or play structure the kids outgrew, new life as a chicken house.

Mimi Kahn, who operates Mimiâ€™s Garden Design in Pacific Palisades, Calif., lives in a neighborhood that doesnâ€™t officially allowÂ chickens, but she visited with all of her neighbors for their approval before acquiring her hens. Her childrenâ€™s former play structure required some re-working to become a coop, and eventually she decided to enlarge it. She hired a handyman to add on to the redwood basics, attach chicken wire to make it predator-proof and construct a weatherproof roof.

A corner of the garage can also become a chicken house, with a run built outside. Carpenter Dennis Harrison-Noonan of Isthmus Handyman in Madison, Wis., has helped several homeowners make that conversion.

Using existing structures helps your coop fit into the neighborhood.

â€śPeople donâ€™t want to shout out that they have chickens, but thereâ€™s no need to hide it, either,â€ť Harrison-Noonan says.

Repurposing isnâ€™t limited to whole structures. Used wood, hinges, doors, windows and other construction materials can be employed as parts of a chicken coop.

Pre-fab coops are the simplest way to go. They arrive in a box, ready to be set in your yard and welcome chickens. They might be made of wood or durable plastic in a simple and attractive design.

Some-assembly required kits come with everything you need to put your coop together, usually with customizable options to suit your needs. Evelyn Zanella (Auntie Evie) of Auntieâ€™s Paws N the Pines pet-sitting service in Cambria, Calif., assembled a coop kit and added two optional nesting boxes. (Currently, her hens lay their eggs in the dog igloo in the back corner of their yard. Go figure.)

Numerous plans for chicken coops are available online and in books. If youâ€™re going to build it yourself, choose one within your capabilities. Owen Taylor, training and livestock coordinator for Just Food in New York, originally built coops for community gardens using detailed plans that required each piece of wood to be cut several times. He now builds 4- by 8-foot coops that take advantage of the sizes plywood comes in.

In addition to safe shelter, chickens need a place outside to enjoyÂ activities like scratching, taking dirt baths and enjoying the sun. A movable coop, called a chicken tractor, can serve those needs. Chicken tractors take their name from the effectiveness of a small group of chickens accomplishing what would otherwise be done by a tractor: aerating the soil, fertilizing it and removing weed seeds. By making it movable, with wheels on one or both ends, the chickens can be transported from one part of the yard to another to happily work the soil.

The size and number of chickens figures into the size of the coop. Taylor advises prospective chicken keepers to figure on a minimum of 4 square feet per hen, inside and outside, for standard-sized chickens, and 3 square feet for bantams, which are small varieties of chickens.

â€śSpace is first,â€ť he says. Crowded chickens will peck at each other. In cold climates, indoor space proportional to the number of chickens will be warmer from the chickensâ€™ body heat.

Divide the space so you have a quarantine area from the start. Youâ€™ll want to keep new chickens separate from your flock for a week or two to make sure they arenâ€™t harboringÂ diseases that could infect your flock. Likewise, if you plan to show your chickens, you should quarantine those that have been to a show to protect the flock against illnesses they might have picked up there.

Itâ€™s nice to have a secluded area for a sick chicken, too, to avoid infecting the others and give it space to recover.

Occasionally, one hen will be a problem, becoming either too aggressive or the object of aggression. Sometimes separating it from the group temporarily will resolve the issue.

Christine Heinrichs has written two books on raising traditional-breed poultry in flocks, How to Raise Chickens (Voyageur Press, 2007) and How to Raise Poultry (Voyageur Press, 2009). She maintains the Society for the Preservation of Poultry Antiquitiesâ€™ collection of antique poultry books and magazines. She lives on Californiaâ€™s Central Coast with a White Dorking hen and a Buttercup.