Sheep Can Help You Control Weeds On The Farm

Many people think goats are tops for controlling weeds, but sheep, with a diverse diet that extends far beyond just grass, are terrific weed eaters. 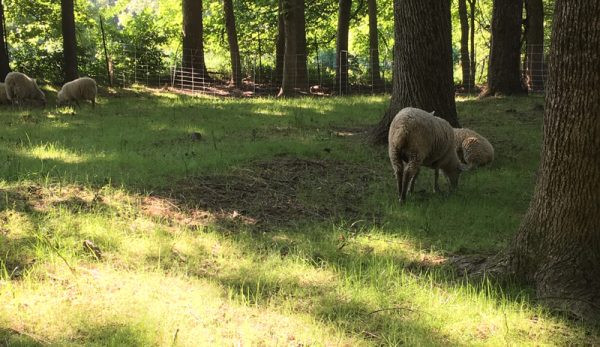 I was chatting with a nearby farmer recently and he told me how much he admired our sheep in their new pasture, which is visible from the road.

â€śThey eat a lot,â€ť I replied with a laugh. â€śAnd they eat a lot more than grass! Weâ€™ve carved out a pasture out of our woods with those sheep.â€ť

We live on 20 acres of nearly all woods in southern Indiana. Itâ€™s lovely, rolling land that I enjoy tremendously. But it has always been a sore point for me that only about one of those acres is devoted to pasture.

So, when we decided to get sheep a while back, we knew we were going to have to do a lot of work to get it ready. Our one-acre pasture with grass was far from the house. We decided to create a smaller pasture near the house so we could keep an eye on the sheep at first.

Eventually, we planned to fence off the larger grassy pasture as a way of rotating grazing.

Our first venture into using the sheep as weed eaters came when we fenced off that smaller pasture. It was about a half an acre of trees, brush and weeds that had been left dormant for many years.

The proposed pasture adjoined an outbuilding that serves as my husbandâ€™s ceramics studio. So we figured we could keep an eye on the sheep. But as we looked at the area, we decided we could have a useful silvopasture as well.

We could have a pasture that includes grass, trees and livestock.

Ever wonder how sheep experience the world around them?

A friend and sheep mentor told me to let the sheep clean out the dense brush that included poison ivy, rosa multiflora and tons of tiny tree shoots. I was skeptical, looking at that mess of plants.

But once we finished the fence and introduced five sheep to the property, I amazed over how quickly the weeds disappeared! In two weeks, the property was bare.

Sheep are particularly fond of forbs, which are leafy greens other than grass. In watching my own sheep, I routinely see them choose a tender young bush or tree to attack before they will go after the grass.

Forbs can be flowering plants and are very nutritious.

Many forbs are invasive species, so if you have a patch of kudzu for example, the sheep will eat that happily. Sheep also eat poison ivy and autumn olive, both of which we have in abundance on our land.

You do need to be careful that there are no plants that are toxic to sheep. Iâ€™ve seen hemlock, for example, on my friendâ€™s sheep farm. She was careful to make sure her electric netting fence kept the sheep away from that. Sheep can die if they eat enough of it.

You also donâ€™t want to let your sheep have access to common garden plants, such as chrysanthemums, buttercups, azaleas, daffodils or elderberry. Those are toxic to sheep as well.

Compared to cattle and horses, sheep eat a wider variety of plants. This is why they are so good at clearing the undergrowth in the woods.

I know some people prefer goats for brush clearing. But honestly I have found sheep to be excellent at controlling weeds in our overgrown Midwestern woods.

Sheep are, quite possibly, the ultimate small-farm ruminant.

We have started using our own electric netting fence to move our sheep around in large areas that we want to get cleaned out. We now have them working on a small area of woods just off of our large field.

When they arenâ€™t working on that, I bring them into the formerly bare pasture that is now planted in pasture grass and clover. I donâ€™t leave them on the new grass long, but just enough for them to strip down the small bushes that want to grow back up and choke out the grass.

I notice when the sheep go in my new silvopasture, they head for the leaves on the small bushes and the weeds before they start nibbling at the tender young grass. After a couple of hours, I have my border collie, Dash, herd the sheep out of the new pasture to give the grass time to grow backâ€”hopefully stronger and thicker than it was before.

And better yet, without weeds.