What and how to feed sheep is important, but minerals and copper also play crucial roles. Here are the key aspects of what you need to know. 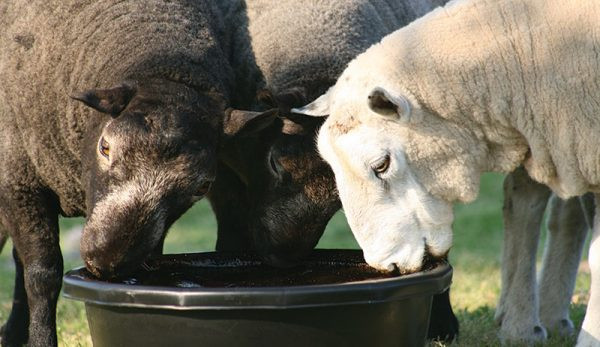 Feeding sheep isnŌĆÖt terribly complicated or difficult, but there are a few important things to know to help keep these animals happy, healthy and productive.

Sheep are designed to eat forage. They are grazers like cattle rather than browsers like goats. Sheep graze an average of 7 hours a day, primarily around dawn and in the late afternoon, and they prefer pasture grasses and broad leaf plants, though some hardy breeds nibble leaves and tender brush.

Sheep arenŌĆÖt designed to eat high concentrate diets based on grain, though some sheep including lambs, late gestation and lactating ewes, and elderly sheep need a measured amount of concentrates, especially when kept on marginal pasture. Unless youŌĆÖre good at formulating nourishing rations, stick to bagged commercial sheep grain products. Or, before mixing your own, discuss your needs with a nutritionist at your state agricultural college or your county extension agent, who can advise you based on the forage you feed, the class of sheep youŌĆÖre feeding and foodstuffs available in your locale.

When adding grain, go slowly. This is true of all dietary changes. The microbes in sheepŌĆÖs rumens (the first, large chamber in their digestive tracts) need time to adjust to new feeds. Abrupt changes can cause microbe die-off leading to toxicity, illness and death. And donŌĆÖt overfeed grain. Susan Schoenian, a sheep and goat specialist for the University of Maryland, suggests anything over 1 pound per feeding is too much.

Lacking pasture, sheep need access to quality fine-stemmed, dustfree, moldfree hay. Lambs and late gestation or lactating ewes do better on legume hay, but grass is better for maintenance diets. A common recommendation is to feed sheep at least 11Ōüä2 percent of their body weight in forage per day.

2. Much Ado About Minerals

Trace mineral salt blocks are not enough. Loose, granulated minerals mixed with your sheepŌĆÖs grain rations or presented in self-feeders work best. Some sheep, however, wonŌĆÖt self-feed loose minerals. Adding a little extra salt might tempt them or feeding a tub lick product mixed with molasses and served as a solid works, too. Check your mix. If it contains salt, donŌĆÖt provide a separate salt block. Place mineral feeders and tubs where theyŌĆÖre under cover, easily cleaned and accessible to your sheep.

DonŌĆÖt feed too much copper. This is crucial.

Sheep do need copper in their diets. Copper is used to maintain an effective immune response and also plays a part in stress resistance, maintenance of hoof tissue and wool production. However, sheep accumulate copper in their livers more readily than other farm animals. They require about 5 ppm (1 ppm is equivalent to 1 milligram of something per liter of water or 1 milligram of something per kilogram of soil) of copper in their overall diets, but toxicity can occur at just 25 ppm, depending on other elements in the diet and the breed of sheep involved. Because copper occurs naturally in plants, soil and water, sheep normally meet their needs without supplementation.

Protecting sheep from copper toxicity is a complex subject to discuss with your sheep-savvy veterinarian or county extension agent. Keeping these points in mind can help.

Water is an important feed element, too. Sheep drink 1Ōüä2 to 4 gallons of water per day, depending on the water content of their feed, the class they fall into (a lactating ewe nursing three lambs needs more water than a pet sheep) and environmental conditions.

Water should be clean. Sheep wonŌĆÖt drink water soiled with even a few droppings. It should be free of ice in the winter and placed in shade in the summer. It can be served in buckets, troughs, tubs or automatic waterers. Several smaller receptacles stay cleaner and are easier to dump, scrub and refill than one large one.

Use feeders, and keep them clean. DonŌĆÖt feed off the ground, a practice that wastes good feed and leads to increased internal parasite loads and disease.

Grain can be fed from troughs as long as thereŌĆÖs space enough for all members of a group to eat at once. Allow about 16 inches of linear space for an adult sheep and 12 inches for a lamb. Tubs and on-fence, removable feeders are viable options for smaller flocks.

Baled hay is usually fed from hayracks. DonŌĆÖt use hay feeders with bars for horned sheep that can catch a horn and seriously injure themselves. Big round bales generally require hay rings designed specifically for sheep. Not using one will result in a good deal of wasted hay, and lambs can injure themselves climbing on big bales, especially by jumping off.

These are just the basics of feeding sheep, but if youŌĆÖve never done it before, theyŌĆÖll help you start out right.