Sheep & Goats & Their Wild Cousins: How Livestock Has Adapted for Winter

In this third of four parts, we learn how goats evolved to be versatile climbers, why some sheep produce no wool, and how some breeds became domesticated. 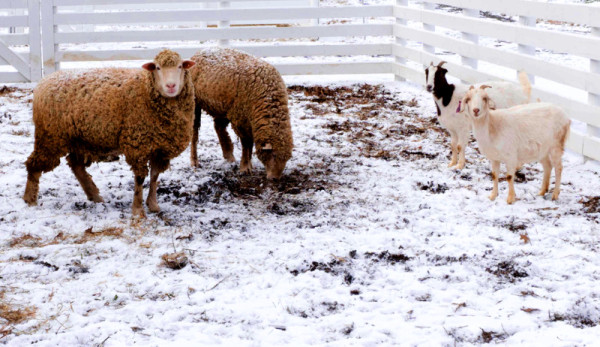 Goats evolved in a tightly connected relationship with rugged terrains, which are often isolated and remote. Separation led to specialization. As a result, goats cover the widest range of ecological niches than any other domesticated livestock. For example, consider the diversity of goats that thrived during the Ice Age. Myotragus, a diminutive goat about the size of a modern housecat, had teeth for gnawing like a rat and was food for cave people. Another goat, Procamptoceras brivatense, resembled a unicorn, with spiraling, twisting horns that curved closely together. An impressive giant goat lived during this time as well, the cow-size Soergelia elisabethae.

Sheep and goats are so closely related that a short-haired sheep and long-haired goats could be confused with each other, but they have some distinct differences that affect behavior and domestication. Sheep and goats are ruminants, as are cattle, and their multichambered stomachs generate heat during a long, involved, digestion and fermentation process. In goats, they generate their own heat, so much that they are equipped with lots of sweat glands. They can live well in cold, windy, exposed environments by eating more roughage (stems, twigs, leaves), which in turn generates more internal heat. Feeding domesticated goats too much grain in the winter can rob them of their heat source and disturb the natural ruminant functions that roughage provides.

Goats are capable of climbing, standing on their hind legs, jumping and traversing rough terrain to reach more rough plant materials. They spread out further than sheep when browsing, and their herds are looser and more unpredictable than those of sheep, especially during breeding seasons. When daylight shortens, and breeding lessens, the goat herd becomes closer and more consistent with their habits, returning to the same sleeping area regularly. Instead of the rotund, stable-bodied sheep with a low center of gravity, goats are lean climbing machines with long, strong legs. This affects their reaction to stress as well as where they like to roam. Goats can nimbly jump and turn to face an unexpected threat, whereas sheep generally flee with their flock and keep running without looking back.

Most wild goats are endangered, but those who survive today are hardy animals in cold climates. They live in high mountains of Europe, Asia and North Africa. The ibex, for example, range through protected portions of the Alps and Pyrenees. The wild goat ancestor to our domestic goats, Capra hircus, lives in the Balkans across the Middle East to northern India. They happened to become domesticated because they ranged in closer proximity to human agriculture. The wild goats of North America, the mountain goat, crossed the land bridge from Asia during the last Ice Age. Mountain goats’ capacity for enduring the cold didn’t retreat with the glaciers, however. A dense undercoat of fine hair insulates their bodies. This double coat of winter hair is closely linked with human civilization. Five thousand years ago, it was common for carpets and clothing to be made of cashmere. Native Americans collected shed hair, rather than shearing or combing.

Sheep are more well-known for their wool production, an obvious advantage for enduring a cold winter. The enviable qualities of wool include being water repellant, absorbent, insulating, fire-resistant and durable. However, many sheep throughout the world are nearly hairless, adapting to the heat of deserts and grasslands. Like goats, some wild sheep live in the mountainous regions, but sheep are more likely to be found in open areas than cliffs. For example, North Americaâ€™s bighorn sheep, Ovis canadensis, lives in the same region as mountain goats, but in the lower elevations where forage is greener and grassier. Sheep are loyal to their seasonal ranges, migrating between summer and winter pastures along a regular path. With these habits, and in this habitat, wild flocks were more likely to encounter humans, become domesticated, and were naturally easier to herd as a group than goats. Thus began a long, complex story about our interdependent relationship with animal fiber, not to mention the layers of coats we put on to work with animals on a cold winter day.